US exit from nuclear talks would be ‘strategic mistake’, says Iran official 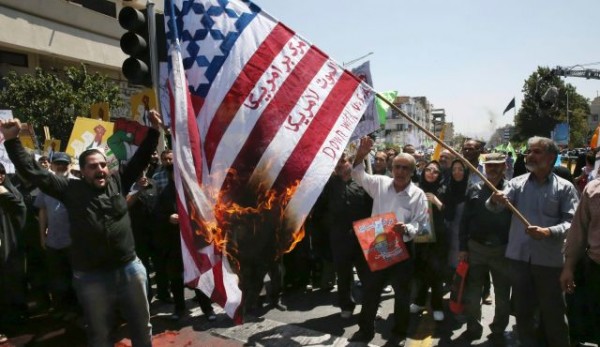 Iranian protesters mark ‘Al-Quds Day’ in Tehran, July 10, 2015. Photo by AP. The writing s on the US flag that the protesters are setting on fire reads death to to America in Arabic , English and Persian. Instead of the 5 pointed star the flag is shown with the star of David , the symbol of the Jewish state
Share:

Tens of thousands of Iranians chanted “Down with America” and “Death to Israel” during annual pro-Palestinian rallies nationwide Friday, as a top leader said the U.S. would be making a “strategic mistake” if it pulled out of ongoing negotiations on Tehran’s nuclear program.

The “Al-Quds Day” rallies took place as Iran and six world powers were meeting in Vienna to work out a deal to limit Iran’s nuclear program in exchange for easing tens of billions of dollars in economic penalties on the Islamic Republic.

Iranian President Hassan Rouhani appeared briefly at the rally in the capital, Tehran, but did not mention the nuclear talks that have run past two extensions and entered the 14th day of the current round on Friday. U.S. Secretary of State John Kerry warned Thursday that the Americans were ready to leave.

“If you drive the talks into a dead end, then it will be you who will be committing a strategic mistake,” Iran’s parliament speaker, Ali Larijani, said at Friday prayers following the rally in Tehran, addressing the U.S. “And its outcome will not benefit you, since Iran’s nuclear staff are ready to accelerate nuclear technology at a higher speed than before.”

At the rally, the hard-line protesters wrapped America, British, Israeli and Saudi flags around pillars and set them ablaze.

Since the 1979 Islamic Revolution, Iran has observed “Al-Quds Day” during the Islamic holy month of Ramadan. Tehran says the occasion is meant to express support for Palestinians and emphasize the importance of Jerusalem for Muslims.

Iran does not recognize Israel and supports anti-Israeli militant groups like Hamas in Palestine and Hezbollah in Lebanon.