In a speech to mark the annual pro-Palestinian “Quds day”, Lebanese Shi’ite leader Hassan Nasrallah said the army had taken the initiative since losing most of Idlib province to an Islamist alliance including al Qaeda’s Nusra Front.

Hezbollah is allied with the army and fights alongside it in Syria.

“Just recently, when Idlib fell, some said that Syria was finished and they began counting days,” Nasrallah told supporters in a speech in the group’s stronghold in the southern suburbs of Beirut.

The momentum that had swept Islamic State and more moderate rebel groups to a series of swift victories over the army appears to have slowed in two major attacks aimed at capturing the cities of Aleppo in the north and Deraa in the south.

The rebel offensives have so far failed to make much headway in the face of stiff resistance by the army, which has used its superior air power to pound their positions.

The army is also closing in on Islamic State militants in control of ancient Palmyra in central Syria, with troops seeking to recapture the city of Roman ruins currently around about 10 km (six miles) away.

Iranian-backed Nasrallah said the army had taken back the initiative across most frontlines, including the border city of Zabadani, near the Beirut-Damascus highway, where it and Hezbollah are fighting three years of rebel control.

“What happened in the last few weeks is clear that the scene has changed. The steadfastness of the Syrian army in facing the great campaign in Deraa, Sweida, Hasaka and Aleppo,” Nasrallah told supporters.

Separately, a mortar round fired by Islamic State militants caused a major fire at a Syrian government building in the northeastern city of Hasaka, which firefighters put out, state television reported on Friday.

Earlier, a Syrian army source said the militants had blown up a third explosive-laden car in the eastern part of the city. The source said there were casualties but gave no further details.

The hardline militant group continues to stage lightning attacks inside the city after being driven out of some districts following a failed offensive last month to capture Hasaka, capital of Syria’s main oil- and grain-producing province. 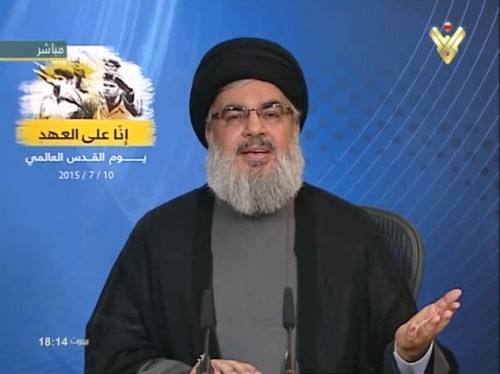 IRAN ONLY HOPE
Nasrallah called Iran “The only hope left for liberating Palestine and Jerusalem.”

Tens of thousands of Iranians chanted “Down with America” and “Death to Israel” during pro-Palestinian rallies nationwide on Friday, as a deadline on talks to reach a deal on Iran’s nuclear program was postponed until Monday – the third postponement in two weeks.

The “Al-Quds Day” rallies took place as Iran and six world powers were meeting in Vienna to work out a deal to limit Iran’s nuclear program in exchange for easing tens of billions of dollars in economic penalties on the Islamic Republic.

Iranian President Hassan Rouhani made a brief appearance at the rally in the capital, Tehran, but did not mention the nuclear talks . US Secretary of State John Kerry warned on Thursday that the Americans were ready to leave.