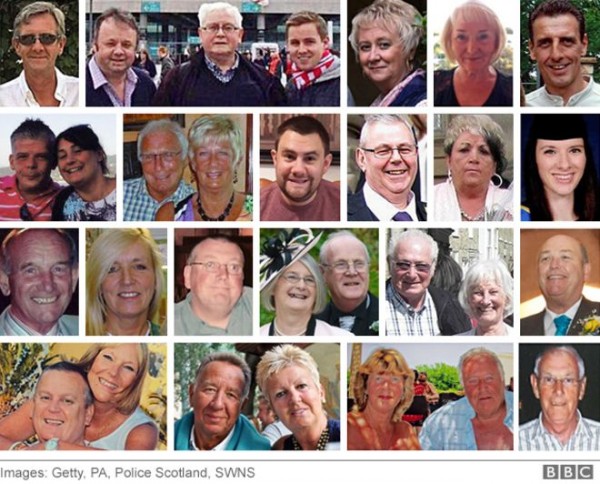 Thirty of the 38 people killed by a gunman on a Tunisian beach were British. They have now all been formally identified and are in the process of being repatriated to the UK. Friends and family have paid tribute to the dead and injured.
Share:

Britain’s foreign office advised against all but essential travel to Tunisia on Thursday, saying a further terrorist attack is “highly likely” in the small North African country.

The warning comes less than two weeks after 38 people – including 30 British nationals – were killed at a Tunisian beach resort by an Islamist gunman in the country’s deadliest militant attack in a decade.

“On balance, we do not believe the mitigation measures in place provide adequate protection for British tourists in Tunisia at the present time and we have therefore changed our travel advice accordingly,” the statement said.

The travel advisory came days after Tunisia Prime Minister Habib Essid announced plans to build awall along part of its eastern border with Libya in a bid to contain the inflow of jihadist militants. The wall will stretch 160 kilometres from the coast inland, covering about a third of Tunisia’s 460-kilometre border with its eastern neighbour, Essid told state TV.

The decision is a major blow to Tunisia’s tourist industry. Hundreds of thousands of British tourists visit Tunisia each year.

UK Foreign Secretary Philip Hammond said officials “have not taken this decision lightly but our first priority will always be the safety of our citizens.”

As of now, however, there was no immediate change to its travel advice last updated five days ago. Two Germans were killed in the Sousse attack.

On Saturday, Tunisian President Beji Caid Essebsi decreed a state of emergency in the North African country for 30 days.

Addressing parliament on Wednesday, Prime Minister Essid said he believed plots aimed at massive deaths and the destruction of the country’s economy are in the works, and justified the current state of emergency.

But balancing tough security with new-found freedoms may come with a price, and rights campaigners worry a crackdown is the slippery slope to oppression that may feed militant ranks in a country where many youth already feel alienated.

The targeting of the country’s vital tourism industry threatens Tunisia’s economy as well as its security. With an overwhelmingly young population, and an official unemployment rate of 15 percent, Tunisia has turned into the biggest source of foreign jihadists in the Iraq-Syria conflict.