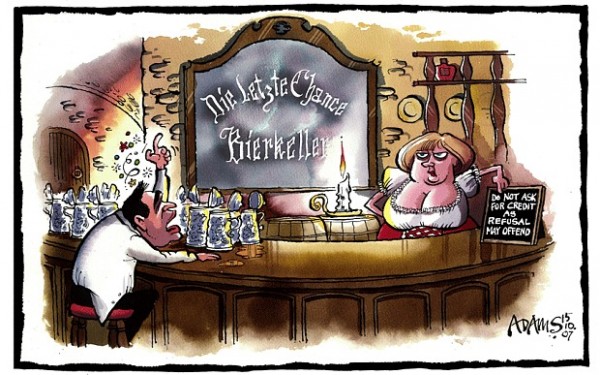 Germany is at last bowing to pressure as a chorus of countries and key institutions demand debt relief for Greece, a shift that could break the five-month stalemate and avert a potentially disastrous rupture of monetary union at this Sunday’s last-ditch summit.

In a highly significant move, the European Council has called on both sides to make major concessions, insisting that the creditor powers must do their part as the radical Syriza government puts forward a new raft of proposals on economic reforms before a deadline expires tonight.

This is the first time Europe’s institutions have acknowledged clearly that Greece’s public debt – 180pc of GDP – can never be repaid and that no lasting solution can be found until the boil is lanced.

Any such deal would give Greek premier Alexis Tspiras a prize to take back to the Greek people after they voted by 61pc to 39pc to reject austerity demands in a landslide referendum last weekend.

While he would still have to deliver on tough reforms and breach key red lines, a debt restructuring of sufficient scale would probably be enough to clinch a deal, and allow him to return to Athens as a conquering hero.

The Greek parliament is due to vote to ratify the measures on Friday.

German Chancellor Angela Merkel said “a classic haircut” is out of the question, but tacitly opened the door to other forms debt restructuring, conceding that it had already been done in 2012 by stretching out maturities.

The contours of a deal on Sunday are starting to emerge.

Syriza has requested a three-year package of loans from the eurozone bail-out fund (ESM) – perhaps worth as much as €60bn – and is reportedly ready give ground on tax rises and pension cuts.

Germany’s subtle shift in position comes as the United States, France, and Italy joined in a united call for debt relief, buttressed by a crescendo of emphatic statements by Christine Lagarde, the head of the International Monetary Fund.

“Greece is clearly in a situation of acute crisis, which needs to be addressed seriously and promptly. We remain fully engaged in order to find a solution to restore stability, growth and debt sustainability,” said Ms Lagarde.

A report by the IMF said a debt haircut of 30pc of GDP “would be required” to meet the original debt targets agreed in 2012. This could be achieved be stretching out the maturities of bonds to forty years and lowering the interest rate, sparing EMU governments the political pain of having to crystalize direct losses for their taxpayers.

The US has clearly lost patience with the Europeans is now bringing its huge diplomatic power to bear, fearing that mistakes in Greece could lead to a geostrategic fiasco and serious damage to the Nato alliance.

“Greece’s debt is not sustainable,” said Jacob Lew, the US Treasury Secretary. “I think it’s a mistake for the European economy, the global economy, to take the risks that are involved with an uncontrolled crisis in Greece,” he said.

Mr Lew said the two sides were only €2bn a part when talks broke down, yet potentially hundreds of billions are at stake if the crisis spins out of control. He deemed it a bizarre form of risk management.

For Berlin, the Greek crisis threatens to mushroom into a much bigger crisis in international diplomacy and Franco-German relations as Paris digs in its heels.

“Keeping Greece in the euro and therefore in the heart of Europe and the EU is something of the utmost geostrategic and geopolitical importance. Allowing Greece to leave would be an admission of impotence,” he said.

Yet even if Europe’s leaders to agree to a comprehensive package for Greece on Sunday, any bail-out still has to be ratified by the German Bundestag as well as by the parliaments of Finland, Slovenia, Portugal, and Estonia.

Up to a hundred MPs from Angela Merkel’s Christian Democrat family (CDU/CSU) have already threatened to vote against fresh money for Greece.

This is quickly turning into a make-or-break moment for her own political career.