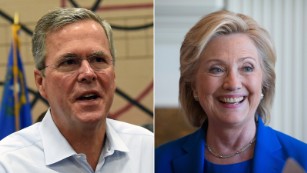 Bill Clinton and George W. Bush have playfully called themselves long-lost brothers, a pair known simply as 42 and 43. But when they shared a stage here Thursday night, one thing above all was nearly off-limits: 45.

They had barely taken their seats, side-by-side, when their routine began.

“Clinton and I are getting a little long in the tooth these days,” Bush said, cracking a smile.

“This is the one month of the year that he’s older than me,” Clinton replied. “So speak for yourself.”

It unfolded as one of the most civil discussions of the political season, a conversation that seemed to be taking place on another universe, where bygones are almost bygones. The politics of the day — one man’s brother could be running against the other man’s wife to become the 45th President — crept in only for a moment.

They were asked how, or whether, political discourse could be elevated.

“I know Jeb,” Bush finally said. “And I’m confident that Secretary Hillary will elevate the discourse. I can’t attest to their surrogates. But I can attest to this surrogate — I’m not going to be a surrogate!”

When it was Clinton’s turn, he didn’t mention Jeb Bush at all, but rather offered a broader lesson about the critical challenges facing the country.

“I expect it to be vigorous, and whoever wins the primaries they’ll have a hard debate,” Clinton said. “We ought to show respect for the debate by trying to be as specific as we can about the choices before us. We can win over the American public by saying it’s not simple.”

The two men, graying and older than when they served their respective terms in the Oval Office, have appeared together so often in recent years that they are far closer to old chums than odd fellows.

But their appearance here in Dallas on Thursday evening marked the first time the two have shared such a prominent stage since the brother and wife fired up the family business: running for President.

It is, of course, far too soon to know whether American voters will send a second Clinton, a third Bush, or someone else entirely to the White House. That topic was intentionally discussed only briefly, yet it lingered beneath the surface like a simmering feud at a family reunion.

“I think the American people expect some sharp elbows in a campaign,” Bush said. “I think what really discourages them, post-campaign, is the inability to govern in a way that is congenial.”

As Clinton nodded in agreement, he said: “If you get this job the next day, it doesn’t matter what was wrong with your opponent. The next day you’re on your own. You’ve got to show up for work and make decisions.”

With that, the two presidents turned back to an easy back-and-forth about their leadership styles in a 40-minute discussion moderated by Margaret Spellings, who served in the Bush Cabinet.

Bush and Clinton made their rare joint appearance to mark the first graduating class of the Presidential Leadership Scholars program, a partnership between their presidential libraries, along with the George H.W. Bush and Lyndon B. Johnson presidential centers.

They stood on stage to congratulate each member of the class — a broad array of 60 professionals — still cracking jokes and making small talk. Laura Bush watched the duo from her seat in the front row.

Hillary Clinton was not on hand, yet her presence was certainly felt.

“We’ve got a lot of tough decisions to make,” said Clinton, who commanded far more time at the microphone than Bush. “That’s all I really care about — besides I know who I would like to win.