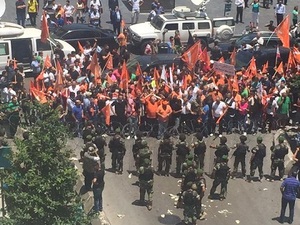 Dozens of supporters of Free Patriotic Movement leader MP Michel Aoun gathered in downtown Beirut and attempted to head to Grand Serail where the cabinet was meeting on Thursday.

FPM MP Ibrahim Kanaan was quoted as saying: ” We call on the government to resort back to the constitution, otherwise we will carry on with our mobilizations.”

The army has called in additional reinforcements to the Banks street, LBC reported.

The army said in a statement that it will not be lured into any confrontation, stressing that it is tasked with protecting state institutions and the people.

“We will continue our protest and we will continue to demand our rights through all peaceful means” , MP Alain Aoun , a cousin of Michel Aoun was quoted as saying during the protest.

Update: The Army announced in a statement that seven soldiers have been injured in the clashes with the FPM near the Grand Serail.

The violence began when Aoun supporters charged through an Army barrier in Downtown Beirut and marched toward the Grand Serail where the Cabinet was meeting.

But they only advanced about 50 meters until they were stopped by a second line of soldiers.

The Army had tried in vain to hold back the protesters who took to the streets about an hour after Prime Minister Tammam Salam angrily shouted at FPM Minister Gebran Bassil during the cabinet meeting about the dispute related to security appointments.

“I did not give you the right to speak,” … “When I speak you shut up” , Salam was quoted as telling Basil who slammed Salam in the presence of reporters for not tackling the issue of security appointments.

The violence erupted after demonstrators tried to remove the barbed wire from the path leading to the Grand Serail.

Baton-wielding soldiers hit demonstrators as they forced their way through the barrier, causing some to fall to the ground. Some protesters hit back with their flag sticks.

FPM MPs on the scene had encouraged the protesters to enter the Grand Serail.

“Why shouldn’t they [protesters] move forward,” MP Ibrahim Kanaan was quoted as saying

Antoun Souaid, the president of the FPM Youth Sector, urged the protesters to back down and not to challenge the Army. He later told reporters that the FPM was fully supportive of the Army and regretted the violence, noting one of the protesters was receiving treatment at a hospital.

The protesters later divided into two groups: one at Riad al-Solh Square, and another at the nearby Banks Street.

The protesters at Banks Street then began chanting: “God, Lebanon, Aoun and that’s it!” After several minutes of chanting, the protesters charged toward soldiers and broke through their security perimeter.

FPM Kanaan denounced as “unacceptable” the violent response of security forces who prevented the protesters from marching to the Grand Serail.

“A man was injured,” he said, challenging a reporter who appeared to suggest the the protesters were responsible for the scuffle. He accused the government of trying to suppress their right to protest.
He said that protests would continue “little by little” over the next few days. “We’ll see what happens.”

Aoun’s anti-government street protests will not lead to achieving any of his objectives, such as the appointment of his son-in-law as Army commander or his election as president, political analysts said Tuesday.

Instead, they said, Aoun’s escalating crusade against the government and the country’s political system would deepen divisions among the Lebanese and backfire on his popular base in Christian areas.

“Street demonstrations planned by the Free Patriotic Movementwill harm the country’s security and economy, and will not achieve Aoun’s main goal, which is the appointment of his son-in-law as Army commander,” Simon Haddad, professor of political science at the American University of Beirut, was quoted as saying by Lebanese media.

“Aoun’s objectives have never been positive to the country. The regional atmosphere is not conducive for street protests and the bad economic situation cannot endure more setbacks. Furthermore, street demonstrations are bound to discourage foreign tourists from coming to Lebanon,”Haddad said.

“The street protests that Gen. Michel Aoun has been calling for are useless. For the time being, they would not have any result or impact before the government changes its policies toward the appointment of Army commander,” Abou Zeid was quoted as saying by Lebanese media.