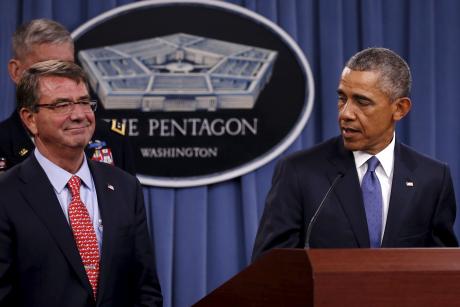 President Barack Obama pledged to increase U.S. support for the moderate opposition in Syria’s civil war on Monday and said the United States needed to do more at home to prevent attacks and combat Islamic State efforts to recruit followers.

Obama, speaking during a visit to the Pentagon, noted the difficulty of preventing small-scale attacks by “lone wolves” within the U.S. homeland despite success at preventing large attacks since the Sept. 11, 2001 assaults on New York and Washington.

“We’re going to have to pick up our game to prevent these attacks,” he said.

Obama said there were no current plans to send additional U.S. troops overseas and repeated that the fight against the militant group also known as ISIL would not be quick.

He said U.S. training of Iraqi forces had been ramped up after being too slow.

The U.S. military has lamented that Iraq had not provided enough recruits to meet U.S. training targets. [ID: nL1N0Z30YB] It has also acknowledged that recruiting and training Syrians to fight Islamic State was moving more slowly than expected, partly because of problems with vetting volunteers. [ID: nL1N0Z42C9]

“We continue to accelerate the delivery of critical equipment, including anti-tank weapons, to Iraqi security forces,” Obama said. “And I have made it clear to my team that we will do more to train and equip the moderate opposition in Syria.”

Obama did not give details on what more the United States would do in that regard.

Republicans criticized the president for not having a successful strategy.

“His rhetoric doesn’t match reality. Over the last year, ISIS has expanded its reach exponentially – and the group’s influence continues to grow,” said Senator Tom Cotton, an Obama critic. “We’re not going to defeat a radical jihadist army with more bureaucrats in DC and no funding for our military on the front lines.”

Obama said more needed to be done to prevent Islamic State from gaining recruits within the United States. U.S. efforts to counter extremism must not single out Muslim Americans or any faith group, but the militant group was targeting its recruitment efforts at that community, Obama said.

“We also have to acknowledge that ISIL has been particularly effective at reaching out to and recruiting vulnerable people around the world, including here in the United States,” he said.