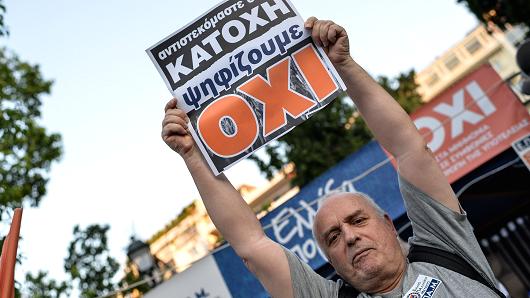 Greece’s rejection of a set of repayment terms offered by its international creditors is likely to be the biggest factor driving stocks when opening bells sound in global markets on Monday.

Germany’s Dax is indicated sharply lower from Friday’s close at around 4 percent, while the euro was down 2 percent against the yen as the news emerged. U.S. stocks are expected to open around 1 percent lower Monday, according to recent stock futures data.

What could be most important for those worried about contagion from the Greek crisis is how Portuguese, Spanish and Italian government bonds perform in Monday morning trade.

If these peripheral euro zone countries, often lumped in with Greece, suffer a sharp spike in yields, this could cause alarm about whether Greece leaving the currency might cause further contagion to other weaker euro zone economies.

The Greek people decided that the poll—rather than a vote on euro membership as some in Europe had warned—was in fact a vote on the austerity policies which have contributed to ordinary Greeks feeling much worse off. A lot of the market’s reaction may depend on whether investors believe they won’t have a messy departure from the single currency as a result.

“There is nothing yet to say that a strong ‘No’ win would materially increase Grexit risks, [which] will become clearer once we see what line of negotiation he (Tsipras) takes on Monday,” Peter Chatwell, senior rates strategist at Mizuho International, wrote in a research note.

Traders may agree—particularly given an apparent olive branch extended by Wolfgang Schaeuble, the German finance minister who has been one of the most intransigent opponents of concessions to the Greek government, over the weekend.

He told Bild newspaper that Greece could be “temporarily without” the euro, rather than irretrievably out of the 19 nation club.

“It is clear that we will not leave the [Greek] people in the lurch,” he added.

The government, led by left-wing Syriza, will now try to bring its creditors back to the table, with renewed confidence that it has a mandate from its people to press for more concessions.

Yanis Varoufakis, the country’s finance minister, told CNBC on Sunday that they could have a deal in as little as 24 hours after the vote. Given the long, tortuous and inconclusive nature of discussions in the past five months, that appears optimistic.

The first area for concern is Greek banks, which are expected to remain closed until at least Tuesday, after a week where Greeks have been unable to withdraw more than 60 euros at a time.

The Bank of Greece is likely to plead with the European Central Bank(ECB) to raise the ceiling for its emergency backstop, which has been frozen since the country went into arrears on a repayment to the International Monetary Fund (IMF).

Varoufakis and Prime Minister Alexis Tsipras are likely to push even more for a haircut to Greece’s debt, with the backing of an IMF report, made public on Friday, which admitted that the country’s debt was “unsustainable.”

Demetrios Efstathiou, strategist at Standard Bank, wrote in a research note that “markets should not panic. At least, the referendum saga is out of the way, and moving beyond this point allows for simpler scenario analysis.”

In the wake of the vote, “a more confident Tsipras has to move swiftly and close a deal,” he added.

The next big deadline in this crisis markets will focus on is July 20, when Greece is due to repay 3.5 billion euros to the ECB. If this payment is missed, the central bank may feel obliged to cut off the Greek banks’ remaining lifeline.

The government could still fail even given a strong negative vote, if it cannot secure a deal, according to Erik Nielsen, global chief economist at Unicredit.

“Tsipras has not explained why he thinks that the creditors will now bend over and agree to hand him their taxpayers’ money against fewer reforms, just because a majority of the [receiving] Greeks think that this is a good idea,” Nielsen wrote in a research note.