Opinion polls show ‘No’ ahead in Greek bailout referendum 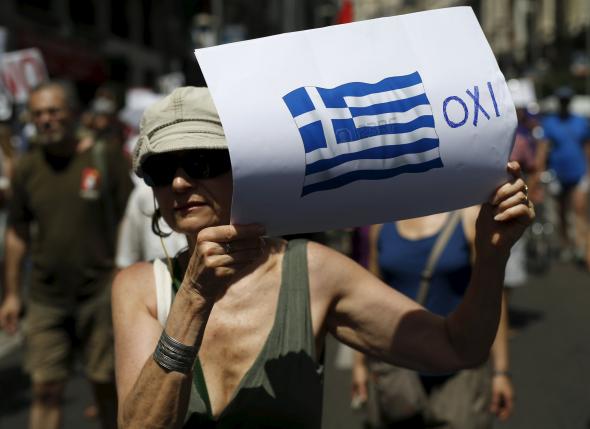 A woman holds a placard with a Greek national flag next to a message in Greek reading, “No” during a rally in support of Greece, in Madrid July 5, 2015. REUTERS/Javier Barbancho.
Share:

Opinion polls released after Greece’s bailout referendum on Sunday showed the ‘No’ vote ahead, suggesting voters had defied warnings from across Europe that rejection of the creditors’ terms would set their country on a path out of the euro.

No exit polls were conducted, but three opinion polls by GPO, Metron Analysis and MRB all showed the ‘No’ camp’ ahead by three points. A poll by Marc estimated 49.5 to 54.5 percent of Greeks voted ‘No’ compared to 45.5 to 50.5 percent voting ‘Yes’, based on surveys conducted through the week.

The polls were released after voting ended on Sunday because of a ban on the publication of polls on the day before a vote is held.

Nikos Filis, parliamentary spokesman for the ruling Syriza party said the result of the opinion polls would allow the government to move ahead quickly to reach a deal with creditors.

“I think this is guidance for the government,” he said after the polls came out

Athens’ partners have warned over the past week that a ‘No’ vote would mean cutting bridges with Europe and driving Greece’s crippled financial system into outright bankruptcy, dramatically worsening the country’s 5-year-long depression.

If confirmed, the result will also deliver a hammer blow to the European Union’s grand single currency project. Intended to be permanent and unbreakable when it was created 15 years ago, the euro zone could now be on the point of losing its first member with the risk of further unraveling to come.

Greek banks, which have been closed all week and rationing withdrawals from cash machines, are expected to run out of money within days unless the European Central Bank provides an emergency lifeline.

However central bankers warned before the vote that a ‘No’ would make it almost impossible for the ECB to turn on the taps, leaving the Greek financial system without funds and facing imminent collapse.

A ‘No’ vote would leave Greece and the euro zone in uncharted waters. Unable to borrow money on capital markets, Greece has one of the world’s highest levels of public debt. The International Monetary Fund warned last week that it would need massive debt relief and 50 billion euros in fresh funds.

Greece’s leftwing government called the referendum only a week ago after it rejected the tough terms offered by international creditors as the price for releasing billions of euros in bailout funds.

Prime Minister Alexis Tsipras denounced the bailout terms as “blackmail” and declared that a ‘No’ vote would strengthen the government’s hand to get a better deal that would allow the banks to re-open this week.

A succession of European leaders and policy makers warned, however, that the bailout terms were no longer on the table. They said the vote was now effectively about whether Greeks wanted to remain in the euro or return to the drachma.

Opinion polls show a large majority of Greeks want to remain in the euro. But, exhausted and resentful after years of austerity cuts imposed under successive bailout programs, many appear to have shrugged off the warnings of disaster, trusting that a deal can still be reached.