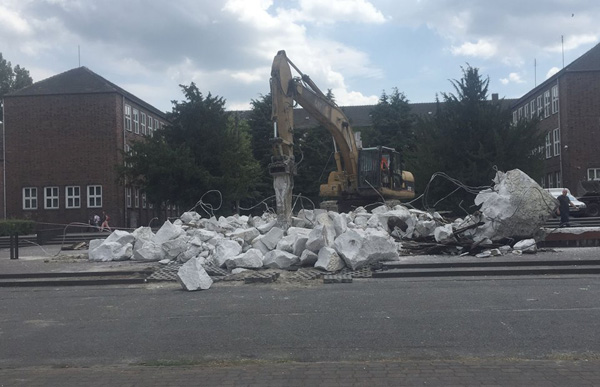 Russia said on Saturday it was outraged by Poland’s destruction of a Soviet war monument, warning Warsaw of the “most negative consequences” after what it said was a flagrant violation of an agreement between the two countries on protecting memorial sites.

Poland has been one of the most vocal critics of Russia’s annexation of Ukraine’s Crimea peninsula in 2014. Russia and Poland share a history of conflicts and the disagreement over war memorials is likely to add to tensions.

“Warsaw must finally understand that the ‘war of monuments’ unleashed in Poland may have the most negative consequences, for which the responsibility lies squarely with its initiators,” the Russian foreign ministry said in a statement.

Authorities in the western Polish town of Nowa Sol took down the brotherhood-in-arms of Polish and Red Army soldiers memorial at the end of June, reducing it to a pile of rubble.

“The monument was large (dozen tonnes of concrete), ugly, always dirty with rust leaking out of the abyss of its emptiness, like blood or tears,” Wadim Tyszkiewicz, Nowa Sol’s mayor said on his Facebook profile earlier this week.

The Russian ministry described the Polish action as an “unfriendly move” and a “direct and flagrant” violation of a 1994 agreement between Poland and the Russian Federation on memorial sites.

“One gets an impression that the mockery of our memorial sites in Poland has been built into the state policy,” the Russian ministry said.

“Issues regarding monuments are within the competencies of relevant local authorities,” Wojciechowski said.

A monument in Warsaw’s Skaryszewski park commemorating Soviet soldiers who died in 1944 is regularly sprayed over with paint, despite close monitoring from the Warsaw police.

Poland was under Soviet occupation for over four decades following the Second World War. The last Russian soldiers left in 1993, 54 years after the first Soviet troops attacked the country in 1939, two weeks after the invasion launched by Nazi Germany.

Many Poles, now national heroes praised for their fight for independence, were persecuted by Soviet authorities after the war. Many were executed.

“Times have changed. We have grown up. The Russians are long gone,” Nowa Sol’s mayor said. “There is no extraordinary ideology here.”