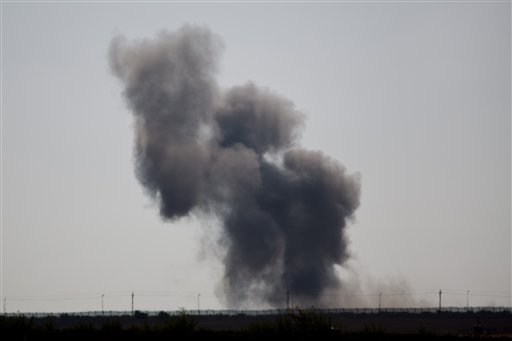 10:45
The Muslim Brotherhood says its leaders killed in a Cairo apartment were murdered in “in cold blood,” calling for a rebellion against President Abdel-Fattah el-Sissi, who it calls a “butcher.”

“Come out in rebellion and in defense of your country, yourselves and your children,” it said in a statement issued in English Wednesday. “Destroy the citadels of his oppression and tyranny and reclaim Egypt once more.”

It called the killings “a turning point that will have its own repercussions… el-Sissi is initiating a new phase during which it will not be possible to control the anger of the oppressed sectors who will not accept to be killed in their own houses and in the middle of their families.”

It says the men were from a Brotherhood committee that supports the families of the group’s detainees and “martyrs,” and were “rounded up inside the house and then were murdered in cold blood without any investigations or indictments.”

The Interior Ministry says the nine people killed in a raid on a Cairo apartment were fugitive Muslim Brotherhood leaders who had been meeting to plan terrorist plots. It says the group included two people who had previously been sentenced to death.

A statement from the ministry late Wednesday said that in addition to weapons, investigators found 43,000 Egyptian pounds ($5,630) along with documents and memory cards. The ministry said the group was planning attacks on the army, police, judiciary and media. Materials seized in the raid would be used in the investigation of the assassination of chief prosecutor Hisham Barakat, who was killed Monday.

The ministry said three members of the special forces team involved in the raid were wounded in the operation.

State television aired images of the apartment after the raid, showing bloodied bodies on the floor with several Kalashnikov assault rifles nearby.

Egyptian security officials say 64 soldiers have been killed fighting militants in the northern Sinai in the deadliest battle on the peninsula since the 1973 Arab-Israeli war.

The militants launched a massive, coordinated assault on army and police positions Wednesday, setting off hours of clashes.

The officials, who spoke on condition of anonymity because they were not authorized to speak to the press, said 90 militants and four civilians were killed in the fighting.

The attack was claimed by an affiliate of the Islamic State group. Sinai-based militants have stepped up attacks on Egyptian security forces since the 2013 military ouster of Islamist President Mohammed Morsi.

The approval came as Egyptian troops struggled to fend off a massive assault by Islamic militants in the northern Sinai Peninsula that killed more than 50 soldiers. On Monday, Egypt’s chief prosecutor was assassinated in a Cairo bombing.

Both draft laws now await President Abdel-Fattah el-Sissi’s approval before they can be passed by decree.

The MENA report did not describe the proposed laws.

Egyptian media reported Tuesday that the anti-terrorism law would give prosecutors more powers to detain suspects for long periods of time and enable authorities to inspect the bank accounts of those facing terror-related charges.

The United States has strongly condemned the massive coordinated attack on Egyptian troops that killed at least 53 soldiers in the northern Sinai Peninsula.

White House spokesman Ned Price says Wednesday’s assault is a terrorist attack and that the U.S. “stands resolutely” with Egypt. He says the U.S. extends condolences to the relatives of those who died, as well as to the government and the Egyptian people.

The White House says the U.S. will continue working in partnership with Egypt to address threats to its security amid a series of recent attacks.

Egyptian security officials say special forces killed nine members of the outlawed Muslim Brotherhood, including a former member of parliament, during a raid on a Cairo apartment.

Wednesday’s raid came as Islamic militants launched a massive coordinated assault on Egyptian troops in the northern Sinai Peninsula that left at least 53 soldiers dead. It was not immediately clear if the incidents were related.

The officials said security forces came under fire when they entered the home in the Sixth of October suburb and returned fire, killing nine men, including Nasr al-Hafi, a former Brotherhood MP.

The officials say three automatic rifles and a hundred rounds of ammunition were found in the residence. They spoke on condition of anonymity because they were not authorized to brief journalists.

An Associated Press reporter heard two explosions from the Egyptian side of the Rafah border crossing with Gaza and saw smoke rising, as a massive militant assault on Egyptian troops was underway some 40 kilometers (25 miles) away.

It was not immediately clear what caused the explosions or if the incident was linked to the coordinated assault on military targets in the northern Sinai Peninsula, which killed at least 50 Egyptian soldiers.

The Israeli military says it has closed the country’s border crossings with Egypt and Gaza in the wake of the assault, without elaborating.

The coordinated assault, claimed by an Islamic State affiliate, is the deadliest attack in the Sinai since the 1973 Arab-Israeli war. Clashes were still ongoing through Wednesday afternoon.

An analyst says the coordinated assault that killed at least 50 Egyptian soldiers is “by far the worst we’ve ever seen” in Egypt’s Sinai Peninsula and resembled Islamic State group attacks in Syria and Iraq aimed at seizing territory.

Daniel Nisman, CEO for the Levantine Group risk consultancy, says the attack Wednesday revealed the weaknesses of the military’s “scorched earth” operations against militants in the restive northern Sinai, which he says have made it difficult to recruit locals to help battle the extremists.

Samir says on his official Facebook page that the Egyptian air force is “targeting terrorists on the ground as clashes continue.”

He did not give a new death toll for militant casualties. At least 50 Egyptian soldiers have died in Wednesday’s fighting, still underway.

Earlier, he said 22 militants were killed as the military fought back against the attackers. The clashes are the most intense in decades in the peninsula.

Egyptian security officials have raised the death toll from an unprecedented wave of coordinated militant attacks that targeted the military in the country’s restive Sinai Peninsula, saying that at least 50 soldiers killed.

Another official says 55 troops were wounded in the Wednesday morning attacks, which have set off clashes with the military that have stretched into the afternoon and are still underway.

The attacks came a day after President Abdel-Fattah el-Sissi vowed to step up a two-year crackdown on militants and two days after the assassination of the country’s state prosecutor in Cairo.

Egyptian military and security officials have raised the casualty tolls from the coordinated militant attacks that struck the country’s restive northern Sinai on Wednesday morning.

The officials say the number of troops killed has now climbed to 38. They also say that 54 soldiers have been wounded in the ongoing clashes following multiple, simultaneous attacks by the militants targeting army checkpoints.

Egypt’s Islamic State affiliate has claimed responsibility for the attacks

Egypt’s Islamic State affiliate has claimed responsibility for the wave of deadly attacks in the northern Sinai Peninsula that have killed at least 30 soldiers.

The claim says the Islamic fighters attacked 15 positions belonging to the Egyptian army and security forces, and also carried out three “suicide operations.”

It says the suicide bombings targeted two checkpoints and an officers’ club in the nearby city of al-Arish. It says the clashes are continuing.

The authenticity of the claim could not be immediately verified but it was posted on a Facebook page associated with the group.

Egyptian security and military officials say a heavy battle is taking place in the northern Sinai town of Sheikh Zuweid, where militants are besieging the town’s main police station.

The fighting is part of a wave of coordinated militant attacks launched on Wednesday morning in restive Sinai, just two days after the country’s state prosecutor was assassinated in Cairo.

The officials say that as part of the attacks, a suicide car bombing destroyed one military checkpoint while another was first hit by mortar shells and rocket propelled grenades, then assaulted by militants.

Security and army officials have said that at least 30 troops died in the wave of attacks.

Samir says that clashes are continuing in the area between the armed forces and the militants.

His statement put the number of soldiers killed so far at 10, but the conflicting numbers could not immediately be reconciled in these early stages of the aftermath and an ongoing fluid situation on the ground.