Kuwait detains driver of vehicle that took bomber to mosque 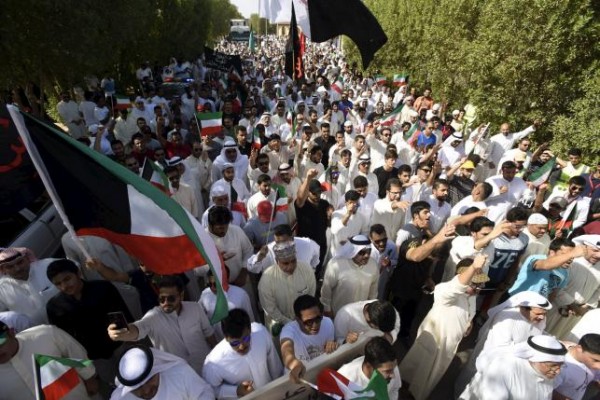 Mourners chant as they march during the funeral of the victim’s of Friday’s bombing at al Jafariya cemetery, in Suleibikhat, Kuwait June 27, 2015. REUTERS/Jassim Mohammed
Share:

Kuwait has detained the driver of the vehicle that took a suicide bomber to a Shi’ite Muslim mosque where he detonated explosives, killing 27 people, state news agency KUNA said on Sunday.

The interior ministry said the driver of the Japanese-made car, who left the mosque immediately after Friday’s bombing, was an illegal resident named Abdul-Rahman Sabah Aidan, KUNA reported.

Militant group Islamic State claimed responsibility for the suicide bombing against 2,000 worshippers praying at the Imam al-Sadeq mosque on Friday, one of three attacks on three continents that day apparently linked to hardline Islamists.

In Tunisia, a gunman killed 37 people including Western tourists on a beach, and in France a decapitated body was found after an attacker rammed his car into a gas container, triggering an explosion.

There was no evidence Friday’s three attacks were coordinated. But coming so close together, they appeared to underscore the far-reaching, fast-growing influence of Islamic State.

Officials said the bombing was clearly meant to stir enmity between majority Sunnis and minority Shi’ites and harm the comparatively harmonious ties between the sects in Kuwait.

Shi’ites are between 15 and 30 percent of the population of Kuwait, a mostly Sunni country where members of both communities live side by side with little apparent friction.

The interior ministry, which had earlier reported the vehicle owner’s arrest, said Aidan, 26, was found hiding in one of the houses in al-Riqqa residential area.

The term “deviant” is often used by authorities in the Gulf region to refer to al Qaeda Islamist militants.

Kuwait has been spared the rampant violence of neighbouring Iraq and the recent spate of Islamic State bombings of Shi’ite mosques in Saudi Arabia, another neighbour.

Islamic State named the bomber as Abu Suleiman al-Muwahed and said on social media that he had targeted a “temple of the apostates” – a term the group uses to refer to Shi’ites, whom it regards as heretics. It did provide details of his nationality.