Greeks line up at banks and drain ATMs 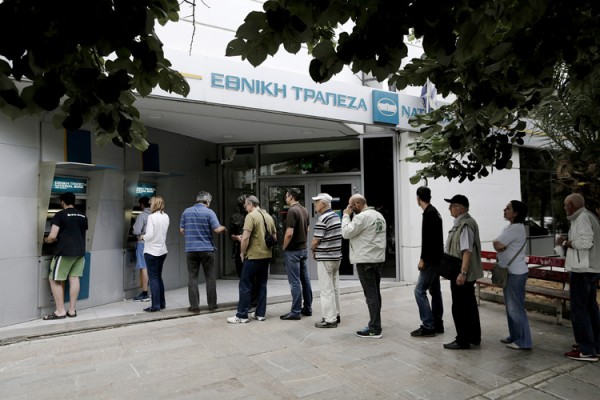 Greece’s banks may need an injection of fresh emergency funds to operate Monday as people rushed to pull out money after Prime Minister Alexis Tsipras called a referendum that could decide his country’s fate in the euro.

Two senior Greek retail bank executives said as many as 500 of the country’s more than 7,000 ATMs had run out of cash as of Saturday morning, and that some lenders may not be able to open on Monday unless there was an emergency liquidity injection from the Bank of Greece. An official with Greece’s Capital Markets Commission, the markets’ regulator, also warned that the Athens Stock Exchange may be unable to operate on Monday without a cash injection into the banking system. A Greek central bank spokesman said it was making efforts to supply money.

The European Central Bank’s governing council was expected to hold a conference call on Sunday to review the banks’ liquidity condition, said a Greek official, who asked not to be named in line with policy. The Frankfurt-based central bank said in a twitter post that it’s closely monitoring developments and would review the situation “in due course.”

Some banks were placing limits in daily cash transactions. Yiota Kardogianni, a manager at a branch of Piraeus Bank SA, said cash withdrawals were limited at 3,000 euros ($3,350) daily and ATM withdrawals at 600 euros. Alpha Bank AE had set a daily limit of 5,000 euros for most of its branches since last week.

“I’m here to take my mother’s pension out before the machine runs out of cash,” said Erato Spyropoulou, who was standing in a line of about eight people at one of National Bank of Greece SA’s ATMs. “It’s very worrying what’s happening because people don’t know what they’re being asked to vote for. It’s the last nail in Greece’s coffin.”

Euro-area finance ministers rejected Greece’s request for a one-month extension of its aid program, which expires Tuesday, shutting down any last chance for a financial stopgap until the referendum is held.

After withdrawing more than 30 billion euros as the anti-austerity Coalition of the Radical Left, or Syriza, took power, depositors are now reacting to the latest twist in the five-month standoff with European leaders and creditors. One banker said 110 million euros had been withdrawn from his institution as of 11:30 a.m. Athens time on Saturday.

The European Central Bank has been reviewing liquidity conditions at Greek banks daily in the past week. Banking officials in Athens said they were expecting a shortage of euro notes by as early as Saturday evening. They asked not to be named because of the sensitivity of the matter.

Greek bank deposits by businesses and households fell to 129.9 billion euros in May from 133.7 billion euros the month before, according to data released by Bank of Greece on its website on Thursday.

The Bank of Greece is making every possible effort to supply the financial system with liquidity, a central bank official said on condition of anonymity because he wasn’t authorized to speak on the matter publicly. Officials from National Bank of Greece, Alpha, Piraeus and Eurobank Ergasias SA, the nation’s four biggest banks, all declined to comment.

“Greek legislation allows either the Bank of Greece governor or the finance ministry to impose capital restrictions,” George Saravelos, foreign exchange strategist at Deutsche Bank AG, wrote in a note to clients. “The extent to which this materializes will depend on the ECB decision over the next 48 hours as well as depositor behavior.”

Some branches of Alpha Bank in central Athens that normally open for business on Saturdays remained shut and one carried a sign that it wouldn’t open. Only a few banks near central shopping and tourist areas are usually open on Saturdays.

About 100 people had lined up at a Piraeus Bank branch at a central Athens street before it opened. Some said they had waited for about three hours. Once word got out that the bank wouldn’t open, one elderly woman fainted.

As an ambulance pulled by to take her away, others spewed vitriol at everyone from the Greek prime minister to Germany.

“Tsipras said he would turn things around, but things are only going to get worse,” said Stavros, a 61-year-old retired sailor, who was lining up to withdraw his pension. He said he was initially planning to go to the bank on Monday but decided to line up on Saturday when he heard about the government’s referendum plans.

He said he won’t be able to pay his mortgage if the banking system doesn’t open on Monday.