U.S. to continue rights sanctions against Iran, regardless of nuclear deal 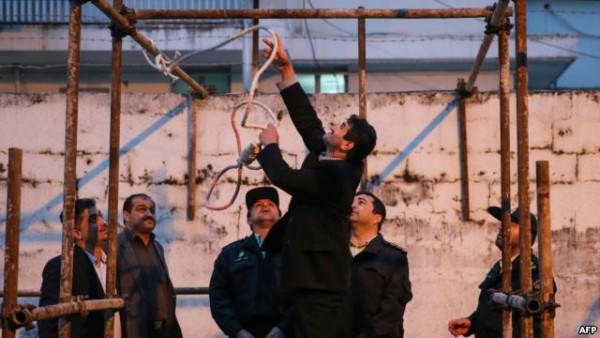 Officials prepare the gallows for an execution in the northern city of Nowshahr on April 15, 2014. Iran is the world’s second-worst practitioner of capital punishment after China
Share:

The U.S. State Department says sanctions imposed against Iran in response to its violations of human rights will remain in place regardless of any nuclear deal brokered by Tehran and six world powers.

Tom Malinowski, the U.S. assistant secretary of state for democracy, human rights, and labor, made the announcement on June 25 in Washington during the presentation of the State Department’s 2014 Country Reports on Human Rights Practices.

Malinowski, the leading author of the report on the global human rights situation, said “regardless of the outcome of the Iran [nuclear] talks, we are going to continue to stand up for human rights in Iran. If any sanctions are lifted as a result of a nuclear deal, the human rights sanctions will remain in place.”

Malinowski said Washington has not seen any “meaningful improvement” in the human rights situation during 2014 compared to previous years.

He said the concerns that Washington has about Iran’s poor rights record includes “widespread reports of torture, political imprisonment, repression against ethnic and religious minority communities, [and] government harassment of journalists, bloggers, activists.”

The State Department’s annual human rights report says: “Iran continued to severely restrict civil liberties, including the freedoms of assembly, speech, religion, and press, and to execute citizens at the second highest rate in the world.”

It criticized the way Iranian courts continue to conduct trials that lead to executions, saying that its legal proceedings “frequently didn’t respect Iran’s own constitutional guarantee to due process or international legal norms.”

It also noted severe restrictions on academic freedom, the freedoms of assembly and association, some restrictions on freedom of movement, official corruption, and a lack of government transparency.

It says Iran placed constraints on investigations by international and nongovernmental organizations into alleged violations of human rights.

It also noted legal and societal discrimination and violence against women, and against lesbian, gay, bisexual, and transgender persons based on perceived sexual orientation and gender identity.

It also documented cases of incitement to anti-Semitism; human trafficking; and severe restrictions on the exercise of labor rights.