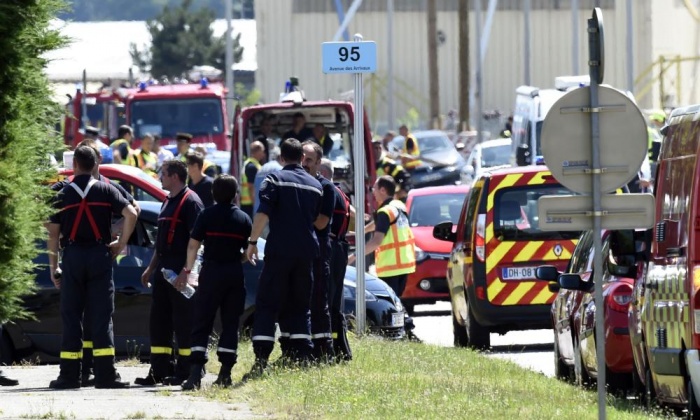 French police and firefighters gather at the entrance of the Air Products company in Saint-Quentin-Fallavier, near Lyon. Photograph: Philippe Desmazes/AFP/Getty Images
Share:

One person was decapitated and several others were injured in an apparent terror attack at a chemical factory in eastern France Friday morning, local media reported.

According to Le Dauphine newspaper, a loud explosion was reported at approximately 9:50 a.m. local time in Saint-Quentin-Fallavier, northwest of the Alpine city of Grenoble.

According to the paper, a man walked into the company’s offices saying he was a member of ISIS and carrying one of the terror group’s flags. After beheading a man at the company’s entrance, he went into the building and set off several gas canisters.

A French security official told the Associated Press that two attackers arrived at the factory in a car, bearing banners written in Arabic, and set off an explosion. One of the attackers was arrested, and local media reported that the man was known to authorities.