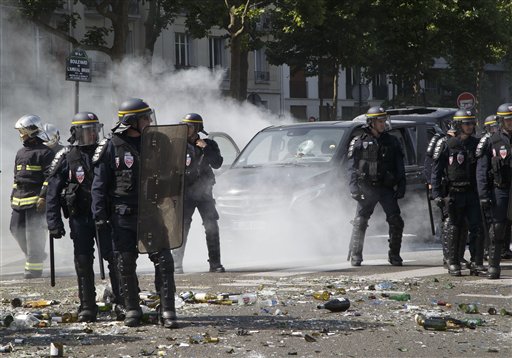 Police officers stand next to a a burned out car during a taxi drivers demonstration in Paris, France, Thursday, June 25, 2015. French taxis are on strike around the country, snarling traffic in major cities and slowing access to Paris’ Charles de Gaulle airport after weeks of rising and violent tensions over Uber. (AP Photo/Michel Euler)
Share:
PARIS- French taxi drivers pulled out the throttle in an all-out confrontation with the ultra-cheap Uber car service Thursday, smashing livery cars, setting tires ablaze and blocking traffic during a nationwide strike that caught tourists and celebrities alike in the mayhem.

Travelers going to and from the airport were forced to walk alongside highways with their bags, while others, including singer Courtney Love, had their cars set upon by striking taxi drivers.

“They’ve ambushed our car and are holding our driver hostage,” Love tweeted. “They’re beating the cars with metal bats. this is France?? I’m safer in Baghdad,”

The French government was aghast, with Prime Minister Manuel Valls lamenting: “These incidents give a deplorable image to visitors of our country.”

Despite repeated rulings against it and an October law that explicitly outlaws UberPop, its drivers continue to ply French roads and the American ride-hailing company is actively recruiting drivers and passengers alike. Uber claims to have a total of 400,000 customers a month in France.

Interior Minister Bernard Cazeneuve rushed back from a trip to Marseille to meet with taxi unions, declaring afterward that UberPop must be shut down and its vehicles seized if caught by police carrying passengers. He said 70 vehicles had been damaged around France in Thursday’s protests and 10 people were arrested.

Cazeneuve said he would meet with UberPop officials to tell them their service is illegal. “It must, therefore, be closed,” he said. “The government will never accept the law of the jungle.”

He ordered a meeting of French anti-fraud officials Monday to put in place measures to immediately stop illegal taxis from servicing customers. Only a decision by the Justice Ministry can ban the App for UberPop, he said.

Earlier, Cazeneuve ordered an immediate ban on unlicensed drivers in the Paris region.

That didn’t phase Uber France chief Thibaud Simphal, who said on RTL radio he was telling his drivers “to continue.” He contended that thus far the justice system “has not demanded that UberPop be forbidden.”

Anger seethed across France, with riot police chasing strikers from Paris’ ring road, where protesters torched tires and swarmed onto exit ramps during rush hour on the busy artery that leads to Charles de Gaulle airport. In Toulouse in the southwest, angry taxi drivers dumped flour onto UberPop cars, tires were burned in Nantes in the west, and in Lyon, in the southeast, roads were blocked.

Love, Kurt Cobain’s widow, said she was ambushed while traveling from the airport, then saved by two men on a motorcycle. It wasn’t immediately clear what type of car she was riding in.

“paid some guys on motorcycles to sneak us out, got chased by a mob of taxi drivers who threw rocks, passed two police and they did nothing,” she tweeted.

She later posted a selfie of herself wearing a motorcycle helmet with her two smiling rescuers.

Uber’s more expensive livery service is still legal but a source of intense frustration for French taxi drivers, who pay tens of thousands of euros (dollars) for the equivalent of medallions and who face customer complaints that they are being resistant to changes such as credit cards and geolocation.

Taxi drivers in other European countries also complain that car services like Uber unfairly undercut them.

A judge ordered a temporary suspension in Spain, and in the Netherlands a Dutch court has ruled that UberPop must stop service. A world away, in China, the government banned drivers of private cars from offering services through an app.

In France, in recent weeks, nearly 100 Uber drivers have been attacked, sometimes while carrying customers, a scenario repeated on Thursday. One passenger was left with a swollen face and black eye after he took an UberPop ride over the weekend, then posted his mangled face on Facebook, an image that quickly made the rounds on French media.

“There are people who are willing to do anything to stop any competition,” said Thomas Meister, a spokesman for Uber. “We are only the symptom of a badly organized market.”

The French government, meanwhile, said nearly 500 legal cases had been filed across the country involving complaints over UberPop. Officials raise concerns about passenger safety, insisting they are not protected in case of an accident by an UberPop driver.

Violence peaked in the Paris region, where images from around the city captured the rage, with an Uber-style car overturned, others with tires slashed and windshields cracked.

Fast-moving technological innovations such as smartphone apps have given the French government headaches when it comes to adapting national laws. With the French unemployment rate in the double-digits, many of the jobless are looking for opportunities to work.

Even Interior Ministry officials acknowledge the emergence of Uber and similar services — which can feature perks such as free bottled water, polite drivers and the chance to pay by credit card — have created a competitive market that is forcing changes in the taxi industry.

However, Cazeneuve pushed back. “Modernity is not illegal work,” he said, denouncing Uber and its leaders “who with arrogance apply not one of the rules of law.”

Addressing a leading complaint of taxi drivers — that authorities are not doing enough to apply the new law — ministry officials emphasized that it will take time to fully implement.

“This is the first time we’ve had a multinational so cynical that, in every country where it operates, flouts the laws in place and lobbies with an army of lawyers and lobbyists to change the laws,” Serge Metz, CEO of the G7 taxi service, said.