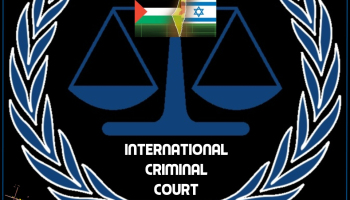 Between 10 and 11 o’clock on Thursday morning – if all goes according to schedule – the Palestinian foreign minister, Riyad al-Maliki, will arrive with a delegation at the office of the prosecutor of the international criminal court in The Hague.

In an unassuming modern suite of offices in the ICC’s white tower block, he will hand over a file running to hundreds of pages. Those documents describe to prosecutors for the first time in detail the Palestinian complaint against Israel for alleged breaches of international law, including serious war crimes.

In doing so al-Maliki will set in motion a chain of events that could eventually see senior Israeli military and political officials indicted for breaches of international law.

The presentation of the Palestinian submission to the ICC will be given added impetus as it follows hard on the heels of the UN Human Rights Council’s report on last summer’s war in Gaza on Monday, which accused both Israel and Hamas of potential war crimes and called for those responsible to be “brought to justice”.

Previewing the contents of the submission last week, Palestinian official Ammar Hijazi said it would detail alleged violations of international law by Israel and the Israel Defence Forces.

Hijazi stated that the file “draws a grim picture of what Israel is doing and why we think that there are reasonable grounds … for the prosecutor to start investigations.”

The ICC chief prosecutor, Fatou Bensouda must decide based on the complaint whether to order a preliminary examination and then a full criminal investigation. And as states themselves cannot be indicted, only individuals, she will also have to determine which Israelis can potentially be held culpable.

Palestinian officials have made clear that even if Bensouda herself decides not to move to the next stage, they reserve the right to make their own formal criminal complaint as they are entitled as members of the ICC.

Broken down into three main categories of complaint, the whole file is introduced by a short narrative running to about 30 pages.

One section of the complaint will focus on issues relating to illegal Israeli settlement activity; another the treatment of Palestinian prisoners. A final section deals with last summer’s war in Gaza.

According to Palestinian sources familiar with the submission, which covers the period from 13 June 2014 to 31 May 2015, high profile cases that will be highlighted include the Israeli decision to develop a new settlement of 2,600 housing units at Givat Hamatos in east Jerusalem, Israeli settlement building in the Jordan Valley and the killing of four boys on Gaza beach during the war, an incident in which Israel recently cleared itself of criminal culpability.

The submission is the Palestinian response to a request for information from Bensouda, not a Palestinian-initiated complaint per se.

Handing over the submission would appear to set Palestinian president Mahmoud Abbas and the Palestinian Authority on a potential collision course with Israel, which imposed punitive measures on the Palestinians when they joined the ICC.

For its part Israel both has declined to provide information requested by Bensouda while arguing the ICC has no authority to investigate a Palestinian complaint because, it argues, Palestine is not a state.

The report was prepared by a 45-member committee under the chairmanship of chief Palestinian negotiator Saeb Erekat and including Palestinian ministers, heads of NGOs, members of the security forces and, representing Hamas in Gaza, senior Hamas figure Ghazi Hamid. A team led by five senior international lawyers commissioned by the Palestinian Authority guided the drafting.

The submission is exhaustive in detail alleging dozens of violations of international law in everything from Israeli expropriation of Palestinian land, to house demolitions, conditions of detention, to serious breaches of the laws of war.

While large sections have been compiled from easily accessible open sources including press reports, reports compiled by both Palestinian and Israeli NGOs and by material published by UN and other organisations, some more sensitive sections were provided by the Palestinian security services.

One unpublished source to be submitted along with the main report has been prepared by the Applied Research Institute NGO in Jerusalem and runs to 485 pages alone, dealing largely with settlement issues. Sources told the Guardian its contents of this would largely be echoed in the main submission.

The Guardian understands that the main force of the complaint on settlement is based on Article 8 of the ICC’s Rome statute, in particular section 2, which deals with: “The transfer, directly or indirectly, by the Occupying Power of parts of its own civilian population into the territory it occupies, or the deportation or transfer of all or parts of the population of the occupied territory within or outside this territory.”

To that end it includes individual sections on settlement expansion, land confiscation, house demolitions, the destruction of Palestinian olive trees by settlers and Israeli military, as well as settler violence against Palestinians and attacks on religious sites.

The submission includes maps and aerial photographs, Israeli government documents and press releases, and “evacuation orders” issued by the Israeli military. The section on settler violence alone details every known alleged settler violation documented during the period running to hundreds of incidents.

“We don’t focus in detail on individual cases,” said one Palestinian official who has been involved in preparing the submission. “The object is to prove to the court the gravity of the crime. It is about showing a process in the time period covered. If the ICC decides to proceed with an investigation on any of the cases contained we will then provide more detail. This is the first submission but we do not anticipate it being the only one.

“Where it relates to settlement building and colonisation we are not in a position to show everything that has happened going back to 1967, only since 13 June last year, so we need to demonstrate how what is happening is a continuation of a longstanding Israeli policy. Colonisation is a huge issue but it will be the first time that the ICC has been asked to consider colonisation as an issue under international law rather than war crimes and that will be difficult.”

Mustafa Barghouti, one of the members of the committee that drew up the submission told the Guardian he believed the handing over of the file had been supplied added significance following Monday’s UN Human Rights Council inquiry accusing Israel of potential war crimes in last summer’s war, not least as the events the UN documented would be included with the file.

“We are dealing with everything. So many different types of crimes. When you look at the Rome statutes there are a very wide range of possibilities for a criminal investigation. What was important for us in the first place was to show that it is systematic.

“One of the questions that people ask is why – since it could take a long time to come to a conclusion. My answer is that it will have a long term and an immediate effect. In the long term it is necessary because those who commit war crimes should be brought to justice. In the short term it is about ending Israeli impunity.”