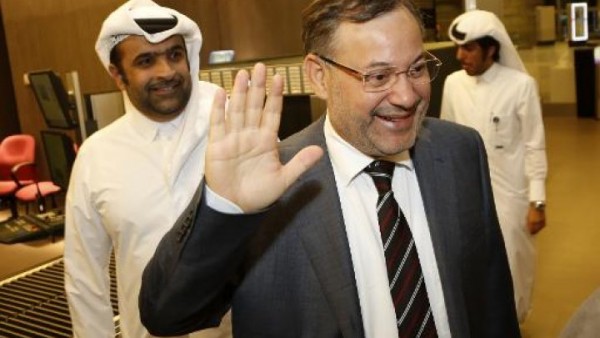 Jailed Al-Jazeera journalist Ahmed Mansour arrived back in Qatar on Tuesday, blaming his controversial two-day detention in Germany on pressure from the Egyptian government.

Mansour’s plane touched down in Qatar at 11:45 pm (2045 GMT), and he was greeted by a number of Al Jazeera executives and members of his family in the VIP lounge of Doha’s Hamad International Airport.

Speaking to reporters in Arabic, Mansour said: “There are lobbies that promote Sisi in the world and play the role of public relations.

He added that his arrest had been “political”.

“From the first second, I knew I was innocent, I did not do anything wrong or hurt anyone. Everything for me was clear, I was strong all the time.”

German authorities released Mansour, 52, on Monday, having detained the prominent Arab TV journalist two days earlier at a Berlin airport in a move that baffled and angered rights and media groups.

He holds Egyptian and British dual nationality and was travelling on his British passport.

He said Britain had acted “shamefully” in doing little to help him after his arrest.

Earlier on Tuesday, the German foreign ministry blamed a mishap, saying officials were not initially aware Mansour was a journalist or that there was a “political background”, while Mansour suggested Berlin willingly acted on Cairo’s behalf.

Prior to leaving Germany earlier in the day, Mansour said the Egyptian government had “succeeded in using some people in the German government for its purposes”.

“I fear that the Sisi regime — the dictatorial regime, the tyrannical regime — was successful in perhaps exporting … their dictatorship to Germany,” said Mansour, challenging local journalists to dig out the truth.

Egypt last year sentenced Mansour in absentia to 15 years in prison on torture and other charges which he has rejected as “absurd”.

His arrest comes at a tense time in relations between Egypt and Qatar, with Cairo accusing Doha of supporting the deposed Muslim Brotherhood.

According to Germany’s interior ministry, the drama started when Cairo on October 2 last year requested Interpol send out a “red notice” to member states asking for Mansour’s arrest.

However, Interpol on October 20 informed members that it saw the arrest warrant as politically motivated, breaching its rules against interventions “of a political, military, religious or racial character”.

The question Mansour’s lawyers are now asking is why Germany kept the arrest warrant live in its system — a step that required the consent of both the justice and foreign ministries.

A German foreign ministry source told AFP that Egypt’s initial requests had given no clues about Mansour’s “activity as a well-known journalist nor an obvious political background”.