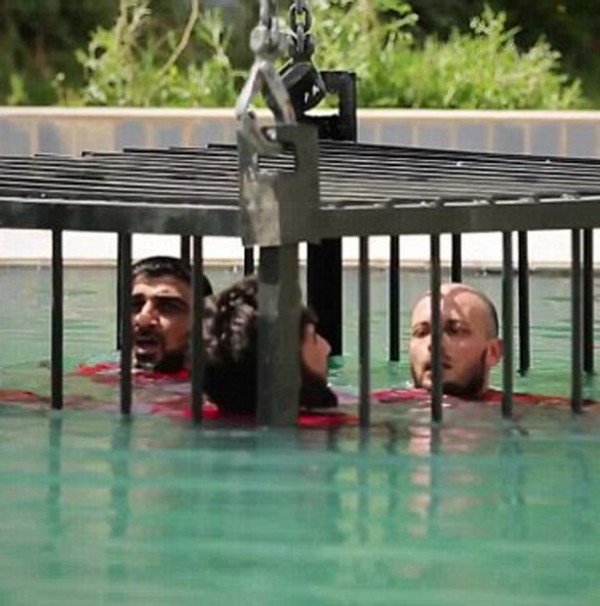 Islamic terror group   ISIS  has released harrowing footage appearing to show caged prisoners being lowered into a swimming pool to drown alongside other horrific executions.

The vile group claimed that 16 men were killed in Nineveh, Iraq, after being accused of spying in a set of horrifying killings.

In the first round of executions, five terrified men can be seen being lowered into the water while locked in a cage together.

Minutes later, the cage is lifted, which shows the mean lying motionless on the cage floor.

The barbaric footage even used pricey underwater cameras which were fitted around the swimming pool to capture the scene from below the water.

But after that horrific ordeal, the video is not finished with its brutal executions.

It then cuts to show four victims locked in an old-looking car in the desert.

The video then cuts to an ISIS executioner brandishing a rocket-propelled grenade, who fires in the direction of the car.

The footage then lingers on the exploded car as in languishes in flames.

Another execution showed in the video sees prisoners being made to kneel before explosives which were tied around their neck were detonated.

Before dying, each of the prisoners were forced to admit their guilt for ‘spying’ before being brutally murdered.

The chilling footage emerged a week after   The Sunday people  revealed a seven-minute film showing six youngsters in combat gear and wearing balaclavas.

They can be seen trading kicks in an apparent training video, while a gun-toting instructor yells encouragement.

Other scenes show the same enforcer, thought to be in his 30s, whacking recruits with a club and ordering them to smash stacks of clay tiles with their fists.

The video is accompanied by an eerie soundtrack of Arabic music and hypnotic chanting.