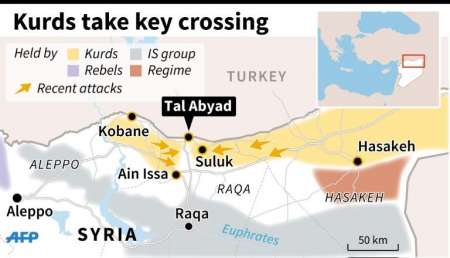 Syrian Kurdish fighters and their allies on Tuesday captured a town once held by the Islamic State group, inching closer to the main IS stronghold in Syria and the de facto capital of the militants’ self-proclaimed caliphate.

The capture of the town of Ein Issa — hours after the Kurdish troops took the nearby Brigade 93 military base — further squeezes the IS extremists, especially after they lost a major supply line when the Kurds captured the town of Tal Abyad on the Turkish border last week.

The advance put the Kurdish guerrilla within about 50 kilometers (30 miles) of the Islamic State’s stronghold of Raqqa. But even with the aid of U.S.-led airstrikes, battling even closer to Raqqa the could prove costly for the Kurds and allied Syrian rebel factions.

The Britain-based Syrian Observatory for Human Rights and Kurdish activist Mustafa Bali said Kurdish fighters from the People’s Protection Units, or YPG, captured the military base on Monday night.

Later Tuesday, the Observatory and YPG spokesman Redur Khalil said Kurdish fighters and their allies took over the nearby town of Ein Issa, the last major residential area north of Raqqa, which the Islamic State group considers the capital of its self-declared “caliphate” or Islamic state that spans across Syria and Iraq.

“Ein Issa and dozens of villages around it are under our control,” Khalil said over the telephone. He said the next task is to enforce and protect these areas because they know that the IS will strike back.

The Observatory said the YPG and its allies are also trying to gain control of a highway linking the northern city of Aleppo, Syria’s largest, with the northeastern city of Hassakeh.

The YPG’s official Facebook page said “dozens of Daesh mercenaries were killed” at the Brigade 93 base, using an Arabic acronym for the extremist group. The Observatory said that Islamic State militants transferred the corpses of 26 of its fighters to Raqqa after they were killed in Ein Issa by airstrikes.

“Operations will continue, but it is imperative that we first attempt to secure areas under our control,” said Nawaf Khalil, head of the Germany-based Kurdish Center for Studies. “Raqqa is a vast area and attacking it will need a great deal of coordination with other groups and the international alliance.”

The United States has found a reliable partner in the YPG, which has been the main force in the battle against the Islamic State group in Syria. The Kurds are moderate, mostly secular fighters, driven by revolutionary fervor and deep conviction in their cause. They are backed by Arab tribesmen, Assyrian Christian gunmen and members of the rebel faction known as Burkan al-Furat — Arabic for the “Volcano of the Euphrates.”

It remained unclear whether the Kurds will try and push farther toward Raqqa. Also, despite the recent Kurdish gains, the Islamic State militants still have another supply line from Turkey, this one running through northwestern Syria to Raqqa.

When cornered in the past, the militants have relied on coordinated mass suicide car bomb attacks and other scorched-earth tactics.

Those tactics have included mass killings. On Tuesday, a media arm of the Islamic State group in Iraq posted a video online purporting to show it kill over a dozen men it described as spies by drowning them in a cage, decapitating them with explosives and firing a rocket-propelled grenade at them in a car.