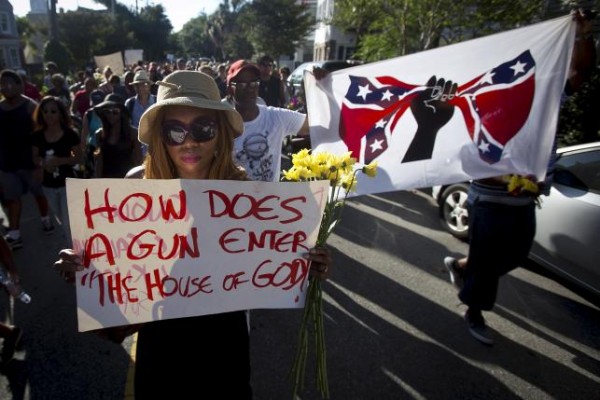 Mourners were expected to flock to the Emanuel African Methodist Church in the historic U.S. city of Charleston as it reopens for worship on Sunday, days after a gunman shot nine black church members to death during a Bible study group.

Arriving from around the United States on Saturday to pay respects to those killed, they created makeshift memorials as a small step toward healing from the latest U.S. mass shooting, which has again trained a spotlight on the nation’s pervasive and divisive issues of race relations and gun crime.

On Saturday, photos surfaced on a website appearing to show Dylann Roof, the 21-year old suspect in the massacre, posing in photographs with a handgun and standing in front of a Confederate military museum and plantation slave houses.

Investigators were aware of the postings which included a racist manifesto and were taking steps to verify their authenticity, the FBI said in a statement.

Roof was arrested on Thursday and charged with nine murders. Authorities say he spent an hour in an evening Bible study group at the church, nicknamed “Mother Emanuel” for its key role in African-American history, before opening fire on Wednesday night.

Outside the church, the oldest African-American congregation in the southern United States, bouquets, bears and balloons covered the sidewalk while hundreds of people lined up to mourn, sing hymns and leave memorials.

Thousands of hand-written messages covered white banners at the church’s entrance, reading “God Bless,” or “Thank you Sen. Rev. Clementa Pinckney. You will 4ever be an inspiration,” referring to the church’s pastor, a state senator who was one of the victims.

Below the church program board, a poster covered in pink and white hearts and silver stars read: “we are all in this together & we will shine on.” A picture of multi-colored hands marked the middle of the card, reinforcing the message.

Monte Talmadge, a 63-year-old U.S. Navy veteran, drove nearly 300 miles (480 km) overnight from Raleigh, North Carolina, and sat in a camping chair across the street from the church.

“There was an overwhelming feeling that made me drive here,” he said. “A church is a place of worship, not a place for killing.”

The victims’ names, written on white ribbons adorned with roses, bedecked one of the church’s gates. Another gate held a black shirt that read “Do you believe us now.”

Text posted on the website that appeared to show the suspect outlined the author’s view of the superiority of white people and says they have no reason to feel guilt about the treatment of African-Americans. The author provides an “explanation” for taking some unspecified action.

“I have no choice … I chose Charleston because it is most historic city in my state, and at one time had the highest ratio of blacks to Whites in the country,” it said.

The massacre was the latest in the series of bloody mass shootings in the United State that have reignited a debate over gun control in a country where the right to own firearms is constitutionally protected.