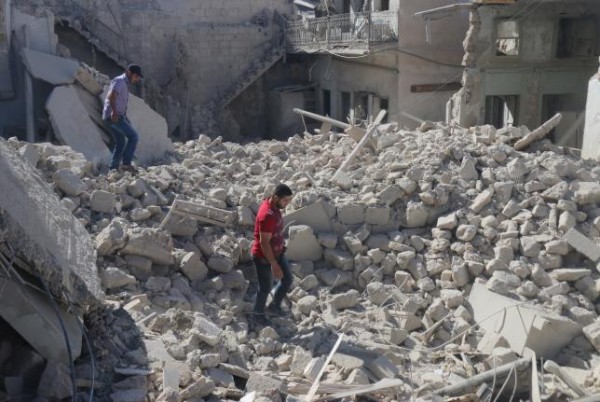 Residents walk amidst rubble at a site hit by what activists said was a barrel bomb dropped by forces of Syria’s President Bashar al-Assad, in the old city of Aleppo May 26, 2015. REUTERS/Abdalrhman Ismail
Share:
Syrian rebels say they have begun a campaign to capture full control of the divided city of Aleppo, Syria’s most populous city before it become a main battleground in its four-year-old civil war.

Neither side has been able to control Syria’s main commercial hub, 50 km from Turkey, since battle erupted there in 2012, turning its UNESCO-listed historic center into a ruin.

The prospect of a rebel offensive in the city is a stark sign of the turn of momentum against President Bashar al-Assad’s government, which has lost swathes of territory to fighters in recent months in the northwest, east and south of the country.

Just four months ago it was the army and its allied militia that were launching a major bid to besiege rebel-held areas of eastern Aleppo. Now, rebels are claiming the initiative.

“The big battle of Aleppo you can say has started in its preparatory phases,” said Yasser Abdul Rahim, a rebel commander who directs a joint operations room set up in April to capture government-held Aleppo.

“There is a decisive final blow coming that will expel the regime from Aleppo and to liberate the city completely,” said Abdul Rahim, a member of the Nour al Din al Zinki rebel group that has been a recipient of foreign support. He was speaking to an opposition-affiliated TV station, Halab Today.

The city’s fall would be a major blow for Assad, restricting his control mainly to a belt of territory stretching north from Damascus to the Mediterranean coast. This would deepen Syria’s de facto partition between the Assad-run west and other areas held by a patchwork of armed groups.

The UK-based Syrian Observatory for Human Rights, which tracks the war, said rebels had captured some ground in government-held districts in the city and to the north of it.

“They are now trying to mobilize around Aleppo, but until now they haven’t made big progress,” said Rami Abdulrahman, who runs the Observatory.

An alliance of rebels including recipients of Western aid fighting under the name Free Syrian Army made a small but notable advance into a government-held part of Aleppo this week.

The army says it beat back the foray into the Rashidin district – the first rebel advance into the heart of Aleppo’s government-controlled residential area in more than two years.

Insurgents have also been bombarding government-held areas previously unaccustomed to the level of destruction inflicted on insurgent-held parts of the city.

More than 30 people were killed in an insurgent bombardment this week, the single most lethal rebel attack of its type there since the war began, according to the Observatory.

Government officials say they are still confident. A government military source said the insurgents had in recent months received artillery capable of destroying buildings, but still lacked the capability “to do something of strategic importance in Aleppo …. because the army is prepared.”

But as government forces and the militia fighting alongside them lose ground elsewhere, diplomats see the fall of Aleppo as a real possibility. One said it would “not be a big surprise”.

The United States and its Western and Arab allies joined Syria’s multi-sided civil war last year by launching a campaign of air strikes against Islamic State, the most powerful of the mainly Sunni Islamist groups fighting against Assad.

The top U.S. general said this week the United States and its allies were weighing the possibility that Assad would soon narrow his focus to defending more limited areas of the country.

Since late March, the government has lost control of nearly all Idlib province to an alliance of insurgents including the al Qaeda-linked Nusra Front. In the south, an alliance of rebels has advanced under the banner of the Free Syrian Army. Islamic State has also scored gains at Assad’s expense, capturing the central Syrian city of Palmyra.

The leader of one rebel group in the north said large injections of foreign military support in the last two months signaled an “international decision” to increase pressure on Assad. The foreign aid had benefited insurgent groups including the hardline Islamist Ahrar al-Sham, said the commander, who spoke on condition he not be identified because of the political sensitivity of acknowledging covert international aid.

“The regime is exhausted. It cannot finish its battles, either with the opposition or with Daesh,” the commander said, using an Arabic acronym for Islamic State.

Meanwhile, Assad’s allies, the Iran-backed Lebanese Shi’ite group Hezbollah, have been helping the army drive insurgents from the border zone with Lebanon – vital to securing Assad’s western zone of control.

The rebel surge on the battlefield has ended a long stalemate, and Western officials believe the increased pressure on Assad may open a window for diplomacy at last. Previous efforts have failed to open any viable peace process in a war that has killed a quarter of a million people and driven eight million from their homes.

Islamic State is also a problem for the rival rebel groups. Its fighters are poised to the north of the city and have been trying to advance at the expense of the other insurgents.

The other rebels say fighting with Islamic State has disrupted their supply lines from Turkey, blocked fuel shipments causing shortages, and slowed their Aleppo attack plans.

The rebel commander in the north said he was very confident the government forces would be pushed back in Aleppo, but he also feared that Islamic State might be the ultimate beneficiary of a government defeat.

Noah Bonsey, senior analyst with International Crisis Group, said: “One can easily imagine Daesh exploiting a rebel escalation against the regime in Aleppo, including by simultaneously escalating its attacks on rebels north of the city.”