Yemen peace talks in Geneva collapse with no deal 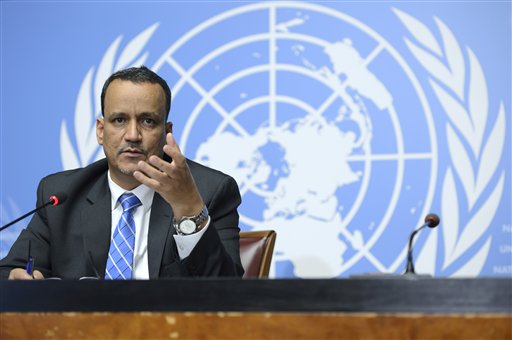 United Nations Special Envoy for Yemen Ismail Ould Cheikh Ahmed speaks during a press conference at the European headquarters of the United Nations, in Geneva, Switzerland, Friday, June 19, 2015.
Share:
Yemen’s exiled government and Shiite rebels who control the capital failed to agree on even a temporary cease-fire Friday as they wrapped up U.N.-brokered talks aimed at ending a conflict that has killed over 1,000 civilians and displaced more than a million since March.

The collapse of the talks came as Saudi-led airstrikes continued to pound the Iran-backed rebels, known as Houthis, and their allies, killing at least 10 civilians in a northern rebel stronghold, witnesses said. The U.N. meanwhile called for $1.6 billion to help millions of Yemenis avoid a “looming humanitarian catastrophe.”

U.N. envoy Ismail Ould Cheikh Ahmed, who mediated the talks in Geneva, told reporters that the two sides broadly favor a cease-fire that would have rebels withdraw from cities and towns seized in recent months and the coalition halt its air campaign against them.

“We didn’t reach a final agreement. We have to be clear and transparent,” he said, adding that a deal “will require further consultation.”

“I come out with a certain degree of optimism,” he added. “It’s a matter of time.”

The fighting in Yemen pits the Houthis and allied troops loyal to former President Ali Abdullah Saleh against southern separatists, local and tribal militias, Sunni Islamic militants and loyalists of President Abed Rabbo Mansour Hadi, who is now based in Saudi Arabia. The rebels seized the capital, Sanaa, in September.

Iran supports the rebels, known as Houthis, but denies arming them. The U.S. backs the Saudi-led coalition, which began launching airstrikes against the Houthis and their allies in late March, but has made little progress in pushing the rebels back.

The exiled government had demanded the implementation of a U.N. Security Council resolution requiring the rebels to withdraw from cities and towns, including the capital.

Ould Cheikh Ahmed said the Houthis had signaled their willingness to implement the U.N. resolution in a proposal presented to him on Thursday, without elaborating on its contents. Another proposal called for deploying civilian observers to verify a cease-fire, he said.

“There is no doubt that there is ground for reaching a cease-fire accompanied by withdrawal. What is important is that we all remember that there is a miserable humanitarian situation in Yemen,” he said.

U.N. spokesman Stephane Dujarric said there has been no date set for a second round of talks but that “discussions can still happen without people meeting in Geneva.”

“We’re taking this day-by-day, step-by-step,” Dujarric told reporters at U.N. headquarters in New York. He said Ould Cheikh Ahmed would return to New York to brief the Security Council before likely embarking on another trip to the region for further consultations.

U.S. State Department spokesman John Kirby said the talks were “a useful start to what will probably be a lengthy process.”

“We continue to support that process by the U.N. special envoy. We continue to urge all Yemeni participants to prioritize reaching an agreement to end the fighting,” he told reporters in Washington.

Yemen’s Foreign Minister Riad Yassin had earlier told the Al-Jazeera network that international partners are “frustrated,” and said the Houthis would bear the blame if the talks failed.

The Friday morning airstrikes targeted Sanaa, the southern city of Aden and the provinces of Lahj and Jouf, officials and witnesses said. The 10 civilians were killed in strikes on the rebels’ northern stronghold, Saada, witnesses said. The officials spoke on condition of anonymity because they were not authorized to speak to the press. The witnesses insisted on anonymity for fear of retribution.

U.N. Under-Secretary-General for Humanitarian Affairs Stephen O’Brien meanwhile warned of a “looming humanitarian catastrophe,” with at least 11.7 million people affected by the conflict. He requested $1.6 billion dollars in emergency aid.

“People across the country are struggling to feed their families. Basic services are collapsing in all regions. Millions of families no longer have access to clean water, proper sanitation or basic health care. Deadly diseases such as dengue and malaria have broken out, and supplies for acute trauma care are running dangerously low,” he said in Geneva.