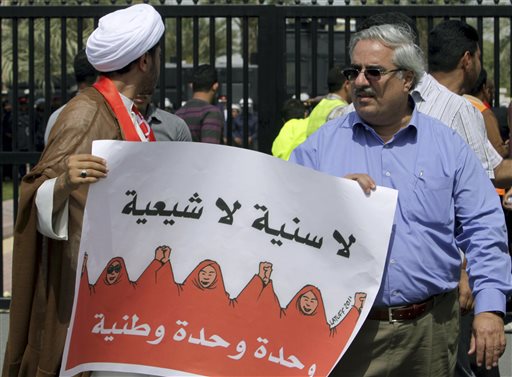 In this Sunday, March 6, 2011 file photo, Ibrahim Sharif, right, the Sunni Muslim leader of the liberal WAAD (National Democratic Action Society) opposition party, and Sheik Ali Salman, head of the Shiite opposition al-Wefaq party, hold a sign reading “No Sunni, No Shia: One unified nation” outside the gates of Gudaibiya Palace in Manama, Bahrain. On Friday, June 19, 2015, Sharif, a top Bahraini opposition leader, was released after more than four years in prison for his role in protests calling for reform in the Gulf kingdom. (AP Photo/Hasan Jamali)
Share:

A top Bahraini opposition leader was released Friday after more than four years in prison for his role in protests calling for reform in the Gulf kingdom.

The WAAD (National Democratic Action Society) group confirmed on its official Twitter account that Ibrahim Sharif was released Friday. Sharif was sentenced in June 2011 to five years in prison for plotting to overthrow Bahrain’s 200-year-old monarchy.

Sharif was one of 20 prominent pro-democracy activists calling for political reforms who were convicted by a military-led tribunal after the government cracked down on them. He was leading WAAD at the time of his arrest in March 2011.

“More than four years after President Obama called for the release of peaceful opposition leaders in Bahrain Ebrahim Sharif is finally out,” he said in a statement. “This is a long overdue move, and he should never have been jailed in the first place.”