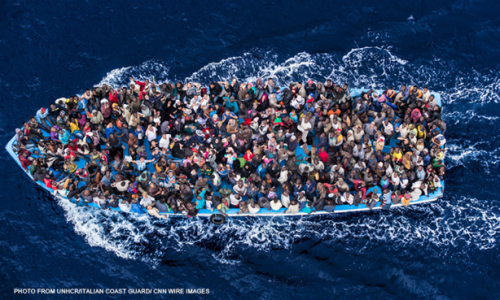 Hundreds of refugees and migrants aboard a fishing boat are pictured moments before being rescued by the Italian Navy as part of their Mare Nostrum operation in June 2014.
Share:

There are more refugees in the world today than ever previously recorded — and more than half are children, the United Nations refugee agency said Thursday.

Nearly 60 million people were counted as forcibly displaced in 2014, according to the Office of the U.N. High Commissioner for Refugees (UNHCR).

If those people were the population of one country, it would be the 24th largest in the world.

One person out of every 122 on the planet is said to be either a refugee, internally displaced or seeking asylum. Last year on average, each day saw another 42,500 people driven from their homes.

The conflict in Syria has been the biggest single driver of displacement, according to the refugee agency’s Global Trends report — but far from the only one.

“One clearly gets the impression that the world is at war — and indeed many areas of the world are today in a completely chaotic situation,” said U.N. High Commissioner for Refugees António Guterres at a news conference earlier.

Turkey became the world’s top refugee-hosting nation in 2014, with 1.59 million Syrians within its borders. Within the EU, Germany and Sweden received the most asylum applications.

Most refugees come from the Middle East, with 7.6 million Syrians taking to the road within their own country, and 3.88 million having become refugees.

And in the Americas, there was a rise in the number of people seeking to escape gang violence in Central America.

Asylum claims in the United States were up 44% over the year.

The Institute for Economics and Peace, a global think tank, also sounded the alarm about the growing refugee crisis.

On Wednesday it said in its Global Peace Index that almost 1% of the world’s population are now refugees or internally displaced people — the highest level since 1945.

In a briefing paper, Amnesty International also called the current refugee crisis the worst since the Second World War.

This Saturday, June 20, is the UNHCR’s World Refugee Day.