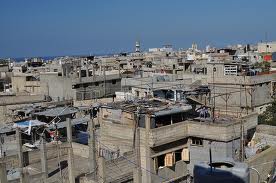 One person was killed and at least  four others were injured on Thursday in armed clashes between two militant groups in the Ain el-Hilweh Palestinian refugee camp near Sidon,  National News Agency reported.

“Gunfire is still underway in the Ain el-Hilweh camp in connection with the clash that erupted between the groups led by Fatah party  and ‘al-Maqdesi’,” NNA said.

Witnesses said machine guns, hand grenades and rocket propelled grenades were used in the clashes pitting members of the Fatah party and the Maqdisi  group.

Maqdisi, which is close to Islamist factions in the camp, is headed by Fadi al-Saleh.

The violence has so far resulted in the death of Palestinian national Mahmoud Samih and the wounding of six  others, including “M. Othman and O. Zubeidat,” the agency said.

Several shops and cars sustained material damage as a house went up in flames after it was hit by a shell, NNA added.

“The Palestinian forces are still exerting efforts to contain the situation and a state of extreme tension is engulfing the camp,” the agency reported.

It said masked gunmen have appeared in several neighborhoods and that residents were appealing for an end to the fighting.

“Palestinian National Security Forces chief Maj. Gen. Sobhi Abou Arab is presiding over a broad meeting with the youth committees at the NSF headquarters, in a bid to reach a solution and restore calm and stability in the camp,” NNA added.

The unrest had erupted on Wednesday following a personal dispute between two men.

Ain el-Hilweh, the largest Palestinian camp in the Lebanon, is home to about 50,000 refugees and is known to harbor terrorists  and fugitives.

By long-standing convention,  known as the Cairo accord , the Lebanese army does not enter the country’s 12 refugee camps, leaving security inside to the Palestinians themselves.