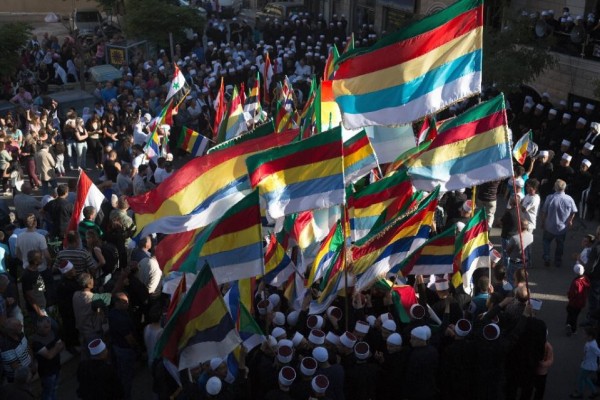 Members of the Druze community of the Israeli-annexed Golan Heights wave their community’s flag during a demonstration in Majdal Shams on June 15, 2015, supporting Syrian President Assad’s army and calling on it to protect their relatives in Syria (AFP Photo/Menahem Kahana)
Share:
Israel pledged Tuesday to protect any refugees who fled towards the Jewish state after a rebel offensive in Syria and Islamist violence there raised fears about the Druze minority’s safety.

A significant number of Druze live in Israel, and leading members of the community have called on the government to help their brethren in Syria following the recent violence.

Without mentioning the Druze, Israel’s military chief of staff chief Lieutenant General Gadi Eisenkot said the authorities were preparing for a possible influx of Syrian refugees and would prevent a potential massacre at the border.

“The reality in the Golan Heights, where internal fighting is near the border with Israel, is of great concern to us, including the possibility we might have to deal with refugees from Syria arriving at the border,” Eisenkot told a parliamentary committee, his words conveyed by a spokesman.

“We will take measures to prevent a situation where refugees are massacred. Our action would be humanitarian,” he was quoted as saying.

The spokesman said Eisenkot was referring to areas adjacent to the ceasefire line on the Israeli-occupied sector of the Golan plateau.

Druze leaders in Israel, including Ayub Kara, a member of parliament with the ruling rightwing Likud party, have appealed to the government to step in.

Israel seized 1,200 square kilometres (460 square miles) of the Golan Heights in the Six-Day War of 1967 and later annexed it in a move never recognised by the international community.

The Druze, followers of a secretive offshoot of Shiite Islam, made up around three percent of Syria’s pre-war population of 23 million people.

They are concentrated mostly in the southern province of Sweida, the only Druze-majority region of Syria, but there are several Druze villages in other parts of the country, including in Idlib and on the eastern slopes of the Golan.

On Wednesday, at least 20 Druze were killed in an unprecedented shoot-out with Al-Qaeda affiliate Al-Nusra Front in northwestern Syria, the Syrian Observatory for Human Rights said.

Syrian rebels on Thursday seized most of a military airport in regime-controlled Sweida province, their first such advance in the region.

Israel’s army spokesman Brigadier General Moti Almoz had declared the situation in the northern Golan “quiet” and under “full control”.

But later on Tuesday, the army declared the area near the northeastern border of the Israeli Golan a closed military zone, limiting access to residents of the area only.

Security sources said this was not because of violence in Syria but to prevent access to the area from the Israeli side, where Druze have said they would cross the border to protect their brethren in Syria.
Yahoo /AFP