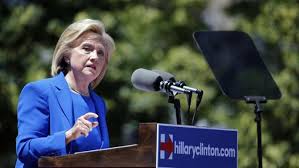 DES MOINES, Iowa – In her first stump speech of her 2016 presidential campaign, an energetic Hillary Clinton thrilled a fired-up crowd of about 600 people here and sided with Nancy Pelosi over President Obama on the thorny issue of trade.

This was the first chance for Iowans to see Clinton without an invitation, and many of her most die-hard supporters jumped at the opportunity. They repeatedly interrupted her remarks with applause and chants of “Hillary! Hillary!” and they hushed when Clinton struck a vulnerable tone discussing her mother.

But the most notable portion of Clinton’s remarks came when she discussed the controversial issue of free trade, which has been a nuisance for her in recent days.

Until Sunday, Clinton had declined to weigh in on a fight in Congress over a Trade Promotion Authority bill that would give President Obama the ability to “fast-track” trade deals. The bill pit the White House against Democrats like House Minority Leader Nancy Pelosi, and Clinton faced pressure from the left to take a stand.

She began by reiterating her view that any new trade deals should raise wages, protect American workers and enhance national security. “I’ve been saying that for months,” Clinton said, before breaking new ground.

“Now here’s what I think should happen now. In order to get a deal that meets these high stands, the president should listen to and work with his allies in Congress, starting with Nancy Pelosi, who has expressed concern about the impact a trade agreement could have on our workers to make sure we get the best deal possible. And if we don’t get it, there should be no deal,” she said.

And she suggested she could have gotten a better deal than Obama. “No president would be a tougher negotiator on behalf of American workers either with our trading partners or Republicans on Capitol Hill than I would be,” she said.

Clinton called for turning the “lemons” of TPA’s defeat in the House on Friday into the “lemonade” of a better Trans Pacific Partnership deal by urging Obama to use the defeat as leverage to renegotiate parts of the trade pact with 11 other countries. “The president has this amazing opportunity now.”

Her remarks came just hours after her campaign officials were grilled on the Sunday morning political talk shows over her non-stance on trade.

Sen. Bernie Sanders, her dark horse Democratic challenger, again called on Clinton to break her silence before her speech. “Corporate America and Wall Street are going to bring that bill back to the House. I would hope very much that Secretary Clinton will side with every union in the country, virtually every environmental group and many religious groups and say that this TPP policy is a disaster,” he said on CBS’ “Face the Nation.”

Clinton’s new position puts some daylight between herself and Obama, who has made trade his top legislative agenda. The White House declined to comment.

At least some liberal activists fighting the trade deal were not immediately satisfied. “We still need her to come out and specifically say Congress needs to see the full text of TPP and have ample time to review it before there is an actual vote on TPA,” said CREDO Action’s Murshed Zaheed.

With Sanders drawing large crowds in Iowa, Clinton proved on Saturday that she could muster serious enthusiasm.

Most attendees who spoke with msnbc said they had supported Clitnon in 2008, when her presidential campaign was derailed by a third-place caucus finish here. None express much to concern about Sanders’ enthusiasm. Many said they hope Clinton will spend more time in the state.

“Democrats love a fight and love underdogs,” said longtime Iowa Clinton ally and Democratic powerbroker Jerry Crawford. “Every candidate will have their day and then Iowa Democrats will decide on two questions: Who is most ready to be president who will fight for them, and who can win the election? When those questions are answered I like our chances.”

Melissa Eggerling, who supported Clinton in 2008 and came out wither her two daughters Saturday, said Clinton’s second campaign is “night and day” from her first one. “I think she understands that she’s really got to understand the voters this time. This campaign’s been a lot more personal.”

Blake Corley, a 22-year-old Clinton super-fan, drove up from New Orleans and got in around 4 a.m. Sunday to see the candidate in the flesh. “When I was born, Hillary Clinton was first lady and I know she’s been fighting for my generation since before I was born,” he said.

Corley, who got into politics at age 9 and self-published a book at 13, says he came to high school wearing Clinton paraphernalia in 2007 and proudly played her in a mock debate. “I’ve been ready for Hillary since 2004,” he said.

Megan Arellano, who said immigration is a top issue for her family, hoped to see Clinton discuss the issue beyond Latino audiences.

Jim Davis volunteered for Clinton’s 2008 campaign and met with the candidate on her first trip to Iowa this year. “She’d be great the job,” he said. “Now we’ve got to see if we can get her elected.”