Druze in Israel protest against the massacre of Syrian Druze 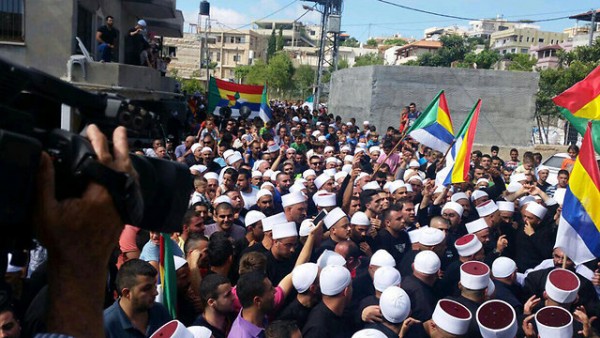 Thousands protested in Israel’s Druze villages Saturday against the massacre of the Druze in Syria  , calling on the international community to take action and aid the Druze community in Syria, which is facing a growing threat of being massacred at the hands of  al-Qaeda linked al Nusra Front .

Stop the massacres,” cried some protesters, “We want the Druze among us,” called others. Donations were accepted during the protests, which the Druze hope will reach their family members in Syria.

“I have family and friends who I’m very worried about and I try to help them in any way I can,” said a member of the Israeli Druze community from Mas’ada village in the  occupied Golan Heights. ”

The al-Qaeda-linked Nusra Front acknowledged on Saturday that its members were involved in the killing of Druze villagers in northwestern Syria this week, saying they had violated orders and would face justice.

Nearly 40  Druze villagers were reportedly killed in the village of Qalb Loze in Idlib province on Wednesday when Nusra Front members opened fire in an incident that spiraled from their attempt to confiscate a house. Twenty seven of the victims were identified

In a statement, the Nusra Front said it had received with “great sorrow” news of the incident in which “a number of Nusra Front members” had taken part without consulting their leaders.

All those involved would face trial in an Islamic court, it added. “Everyone involved in this incident will be presented to a sharia court and held to account for blood proven to have been spilt.”

The statement was circulated on a Nusra Front-affiliated Twitter feed. It did not give a casualty toll or describe what had happened in “the incident”.

The Nusra Front is part of an alliance of insurgent groups that has been gaining ground from President Bashar al-Assad in northwestern Syria.

The killings have triggered statements of concern for the Druze in Syria, including in the south where insurgents including the Nusra Front and Islamic State have been trying to advance towards Sweida province, a Druze stronghold.

Lebanese Druze leaders allied to the Syrian government warned the community faced an existential threat. Some have called for them to be sent arms.

Walid Jumblatt, an anti-Assad Lebanese Druze politician, said, however, the incident was an isolated incident – indicating he did not see it as sectarian – and must be resolved through political contacts with local and regional players.

The Nusra Front said it had sent delegations to the village to investigate the incident and to reassure the people that it happened without the leadership’s knowledge and that they remained safe in areas held by Nusra Front.