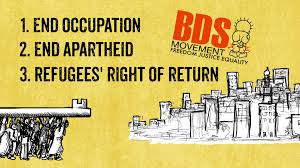 A movement to boycott Israel for its activities in the West Bank and Gaza is growing in popularity, and Israel’s government is vowing to fight back.

The boycott movement, called BDS, which stands for Boycott, Divestment and Sanctions, opposes what it says is an Israeli system of discrimination against Palestinians. BDS has activists working in many countries, and the movement has tens of thousands of followers on social media.

Co-founder Omar Barghouti said BDS is growing quickly — at least in part because of the formation of Prime Minister Benjamin Netanyahu’s right-wing government.

The BDS movement has made front-page headlines in Israel, especially after Stéphane Richard, CEO of Orange, a French telecommunications company, said last week in Cairo that he would cut ties with the company’s Israeli partner “tomorrow” if he could.

Orange issued a statement following Richard’s remarks, saying, “In line with its brand development strategy, Orange does not wish to maintain the presence of the brand in countries in which it is not, or is no longer, an operator. In this context, and while strictly adhering to existing agreements, the Group ultimately wishes to end this brand license agreement.”

Richard apologized for his remarks and said he was misunderstood. He is expected in Israel this week to clarify his comments, according to the Prime Minister’s office.

Barghouti said BDS activists will keep protesting against Orange until the company ends its agreement with Partner Communications.

To counter the growing influence of the movement, Jewish-American billionaires and political mega-donors Sheldon Adelson and Haim Saban bridged their political differences — Adelson is a Republican, Saban a Democrat — and pledged to start and fund an anti-boycott movement.

Netanyahu also promised to go on the offensive against the movement.

“We will gather forces in Israel and around the world to shatter the lies of our enemies, and we will fight for Israel’s right to live in peace and security, to live at all,” Netanyahu said.

Critics of the movement have accused Barghouti and his followers of racism and anti-Semitism. Barghouti denies the allegations.

“We are targeting a system of injustice. This should never be conflated with an attack on any group of people based on their identity,” Barghouti said. “BDS targets institutions, complicit institutions, not individuals.”

The cost for Israelis and Palestinians

Israel’s economy will take a $15 billion hit from BDS and similar nonviolent resistance, largely because of the success of the movement in Europe, according to a new study from the RAND Corp. titled “The Costs of the Israeli-Palestinian Conflict.”

The study also said the Palestinians will lose about $2.4 billion.

But Barghouti said the price is worth it.