Terrifying “vampire fish” falling from the sky in Alaska 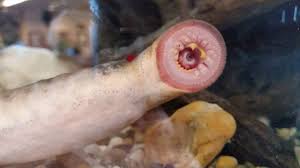 Over the last week, the Alaska Department of Fish and Game (ADF&G) has gotten some strange calls from Fairbanks residents seeing scary looking fish dropping to the ground from above.

“The local Value Village store found a live lamprey in their parking lot,” ADF&G reported on its Facebook page. “Another resident called and said he found one on his lawn!”

It was surely a scary surprise. Looking more like eels or snakes than regular fish, lampreys don’t have scales or fins and can grow to 15 inches long. Instead of jaws, an adult lamprey has a disk-like mouth filled with small, sharp teeth.

Adults clamp their mouths onto other fish, then use their teeth and tongues to rasp through its scales and skin to feed on its blood and fluids. The lamprey releases and drops off after the meal. Some fish die from the attacks, but in many cases they survive, according to the Fish and Game department.

“Commercial and subsistence fishers throughout Alaska are quite familiar with the tell-tale, dime-sized circular scars on salmon and trout that have been fed upon by lampreys.” (Reportedly, lampreys are a tasty catch in their own right.)

Needless to say, the fish is not usually found on land. In fact, most people have never seen the elusive fish up close. Lampreys are born in fresh water, then move to the ocean as adults. They return to their rivers of birth to spawn, including the Chena River, which runs along the south side of Fairbanks.

Wildlife officials believe sea gulls are picking up the squirmy fish there, only to drop them later in surprising and unlikely places. So far, four lamprey have been found on land.