A failure by Turkey’s ruling party to secure a majority in national elections has unleashed a wave of uncertainty in the country’s markets, battering assets and leading investors to reassess the country’s prospects.

Early Monday, the lira plummeted more than 5% to an all-time low of 2.8096 lira against the dollar after provisional results showed the governing Justice and Development Party, or AKP, would be unable to form a majority government for the first time since it swept to power in 2002. The currency trimmed some of its losses to trade 4% lower at 2.7576 lira to the dollar in afternoon trading.

The country’s benchmark stock index fell more than 8% at the open and closed 5.05% lower on Monday. In debt markets, the yield on the country’s benchmark two-year government bond—the most widely traded—surged to 10.43%, the highest since May 4, from around 9.9% last week. Bond yields rise as prices fall.

“Particularly in emerging markets, investors like certainty and strong leadership and that is exactly what Turkey is now lacking,” said David Stubbs, global market strategist at J.P. Morgan Asset Management, which has around $1.7 trillion in assets under management globally. “Uncertainty like this is the last thing a country like Turkey needs right now.”

Turkey has suffered a rough financial ride in recent years. After pouring a record $22.5 billion into Turkish stocks and bonds in 2012, foreign investors reduced purchases to less than $3 billion in 2014 and pulled out around $2.8 billion this year, central bank data show. Turkey’s economy expanded by less than 3% in 2014, missing official targets.

The country also has to contend with the prospect of the U.S. Federal Reserve raising interest rates in coming months, which would make the dollar more attractive to yield-hungry investors. Emerging-market assets such as Turkey’s had been coveted for their relatively high returns when U.S. interest rates were anchored at record-low levels.

Provisional results showed that the ruling AKP was on track to win less than 41% of the vote, according state-run Anadolu news agency, which means AKP will have to try to form a coalition government. Failure to form a coalition government or win a confidence vote for a minority administration could trigger early elections. All three opposition parties in the new parliament vowed after Sunday’s outcome not to partner with the AKP.

Finance Minister Mehmet Simsek said Monday “there is no surprise in the market’s reaction,” adding that a coalition government wouldn’t be as effective as the AKP’s single-party administration in enacting reforms.

Phoenix Kalen, an emerging-markets strategist at Société Générale in London, said that if a coalition was formed, investors would be fearful that “philosophical differences between parties” could “undermine the stability” of a such a tie-up.

Still, in the longer term, scores of investors say that the outcome of the election could sweeten the Turkish investment case.

“Once the dust settles we think political posturing will give way to negotiation,” said Michael Harris, a Turkish equity strategist at Renaissance Capital, adding that “the most likely outcome will be the formation of a credible coalition.” “Our message is that Turkey has matured enough economically to withstand the inefficiencies of a coalition,” he said.

Erdinç Benli, co-head of the global emerging markets team at GAM, which looks after around $130 billion in assets, added that from a valuation perspective Turkish assets also look very attractive now, and that if a stable government is formed, he might look for opportunities to increase exposure. He said it is just about finding the right companies to invest in.

In the run-up to the election, investors expressed concern about Mr. Erdogan’s campaign to write a new constitution that would shift executive powers to his office from the prime ministry. But Sunday’s result appears to have scuttled that effort—at least for the time being.

“That will be positive for democratic institutions in the country and credit positive long term as a result,” said Andrew MacFarlane, credit strategist at BNP Paribas. 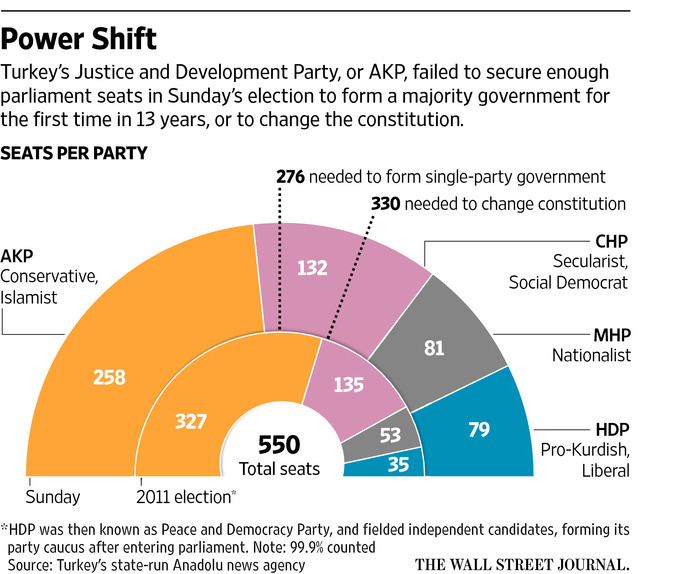