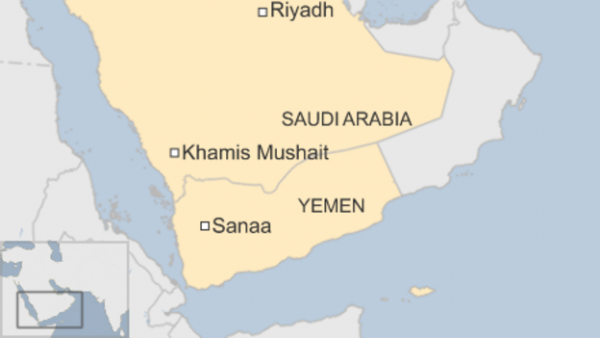 The UN has confirmed that peace talks it is brokering between Yemen’s Houthi rebels and the government will take place in Geneva on 14 June.

The announcement came as the conflict escalated on the ground throughout Saturday with rebels stepping up their attacks on targets in Saudi Arabia.

UN chief Ban Ki-moon called on all parties to enter the talks in good faith and without pre-conditions.
Several months of war in Yemen have claimed more than 2,000 lives.

Saudi Arabia on Saturday shot down a Scud missile fired from across the border by Houthi rebels and their allies, the state Saudi Press Agency said.

It was intercepted by a Patriot missile battery near the south-western city of Khamis Mushait in the morning.

The attack follows on from fighting on the border on Friday, in which four Saudi soldiers and a number of Yemeni rebels died.

BBC Middle East Editor Sebastian Usher says that both the government – now mostly in exile in Saudi Arabia – and the rebels have confirmed that they will attend the peace negotiations and each seems to be trying to strengthen its hand before the talking begins.

Our correspondent says that the call by Mr Ban for all parties to meet in good faith will be easier said than done, as the Houthis and their allies launch ever bolder attacks inside Saudi Arabia to show they have withstood two months of air bombardment – while the Saudis only pound them more.

A pro-Houthi military spokesman told Yemen’s rebel-controlled Saba news agency that the target of Saturday’s Scud attack was the Prince Khaled air base in Khamis Mushait.

Correspondents say that while there has been cross-border artillery and rocket fire into Saudi Arabia, there have been few if any missile attacks since the air war began.

The rebels “aimed to penetrate our borders”, and were eventually repelled, a Saudi statement said.

Destroying the missile capabilities of the Houthis and their allies is a top priority of their 10-week bombing campaign, officials say.

But they say that the task is not easy because the rebels are hiding about 300 missiles in caves.

The bombing campaign was launched to support Yemeni President Abedrabbo Manour Hadi, who escaped to Riyadh when the Houthis advanced on his southern Aden stronghold.

The humanitarian crisis in Yemen has been described as “catastrophic” by the UN with 20 million civilians – 80% of the population – in need of aid.