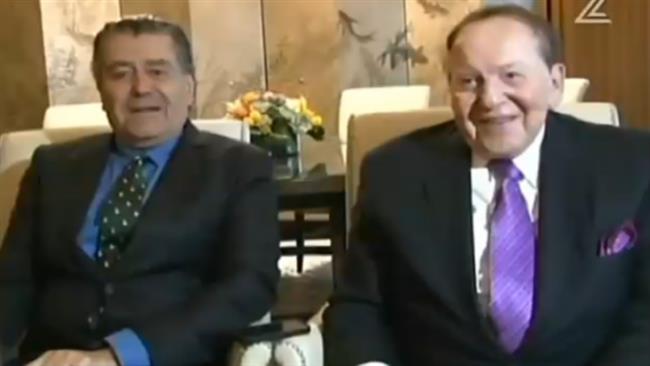 One donated more than $100 million to the Republicans, the other has been the Clintons’ biggest backer. Now billionaires Sheldon Adelson a Republican and Haim Saban , a Democrat have united to fight boycott threats against Israel.

Adelson and Saban hosted a conference of pro-Israel business executives and activists over the weekend in Las Vegas, to begin an initiative aimed at countering the growing threat of international sanctions against Israel.

“That he’s a Democrat and I’m a Republican has really very little to do with it,” said Las Vegas Sands Corp. founder Adelson, who holds the 25th slot on Bloomberg’s Billionaires Index, in a joint interview with Saban on Israel’s Channel 2 on Saturday. While you can “rest assured” the two men will not be supporting the same person in the 2016 presidential election, Saban said, “when it comes to Israel, we are absolutely on the same page.”

Israeli Prime Minister Benjamin Netanyahu has identified the global trend to boycott, divest and sanction Israel over its policy toward the Palestinians, known as the Boycott, Divestment and Sanctions Movement (BDS Movement) , as a major threat.
The boycott issue gained new prominence after Stephane Richard, chief executive officer of Orange SA, said on Wednesday that the Paris-based telecom company would end its licensing deal with Israel’s Partner Communications Co. “tomorrow” if he wasn’t concerned about legal repercussions. Richard later apologized for his comments, made in response to a question over a threatened boycott of Orange’s Egyptian subsidy, Mobinil, and said they weren’t motivated by political concerns.

The Israel-born Saban, who owns a controlling stake in Partner, called Richard’s clarification “a blatant lie.”

BDS supporters say their tactics are the only effective means of getting Israeli to stop building West Bank settlements that most of the world views as illegal under international law, and an impediment toward peace with the Palestinians.

Israeli officials view the BDS movement as part of a campaign by the Palestinians to delegitimize their country. West Bank settlements are not the real target of BDS supporters “but our settling of Tel Aviv, Beersheba, Haifa, and of course, Jerusalem,” Netanyahu said on Sunday.

South Carolina on Thursday became the first U.S. state to enact a new law designed to counter Israel sanctions. The legislation prevents public bodies from doing business with those engaged in the “boycott of a person or an entity based in or doing business with a jurisdiction with whom South Carolina can enjoy open trade.” Other states are weighing, or in the process of approving, similar measures.

Adelson and Saban’s financial muscle and political influence may boost efforts to counter the BDS movement and score some individual successes, said Gadi Wolfsfeld, political science professor at the Hebrew University of Jerusalem. It won’t be enough to counter the larger trend of Israel’s increasing diplomatic isolation, he added.

“If they sponsor serious research which comes up with damaging facts that can hurt the legitimacy of the BDS movement, and publicize that among the world’s political and business elites, that can have an effect,” Wolfsfeld said. “But the overall political movement, related to the general feeling that Israel has no intention of ever leaving the territories and the international community’s growing frustration over that, is not going to be stopped.”

Israeli lawmaker Isaac Herzog, head of the opposition Zionist Union party, said Netanyahu’s policies must share some of the blame for the tide of international condemnation.

Contending against the sanctions movement requires “a strong and very close connection with the administration in Washington, and a diplomatic initiative to alter our situation,” Herzog said Sunday on Israel Radio. “Netanyahu has failed at both.”

Some members of Netanyahu’s Likud party and other factions in his government oppose any concessions to the Palestinians. One such politician, Education Minister and Jewish Home party leader Naftali Bennett, said Sunday that the best response to the BDS movement was building more Jewish settlements in the West Bank.

“We will attack our attackers,” Bennett said at a conference in Herzliya, north of Tel Aviv. “We will boycott our boycotters.”