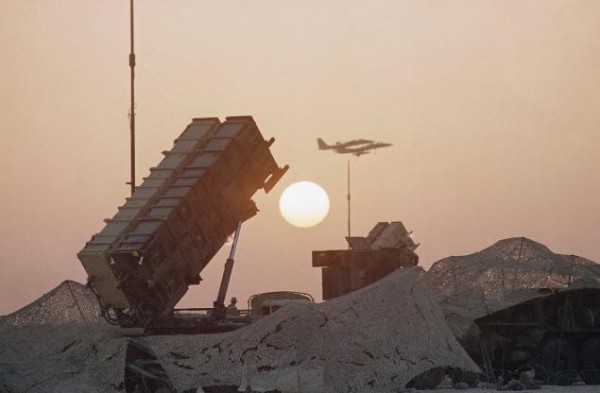 Saudi Arabia shot down a Scud missile fired into the kingdom by Yemen’s dominant Houthi group and its army allies on Saturday, according to the Saudi state news agency, in the first use of the missile in over two months of war.

The missile was launched early Saturday morning in the direction of Khamees al-Mushait, and was intercepted by a Patriot missile, a statement by the leadership of the Saudi-led joint Arab military coalition said.

The area is home to largest air force base in southern Saudi Arabia, the world’s top oil exporter, but there are no oil facilities in the area.

An alliance of Gulf Arab nations has been bombing Yemen’s dominant Houthi militia and allied army units loyal to powerful ex-President Saleh since March 26 in an attempt to restore exiled President Abd-Rabbu Mansour Hadi to power.

The coalition has said a main goal of their war effort is to neutralize the threat that rockets in Yemen pose to Saudi Arabia and its neighbors.

Arab airstrikes have pounded arms and missile stores in the capital Sanaa and other military bases in Yemen almost every day, but the firing of the Scud – an 11-metre (35-foot) long ballistic missile with ranges of 300 km (200 miles) and more – shows the country’s supply has not yet been eliminated.

Saleh, Yemen’s autocrat president from 1978 to 2012, was forced to step down amid Arab Spring street protests but retains most the army’s loyalty and has joined forces with the Houthis in combat with Hadi’s armed backers in Yemen’s south.

Saudi-owned Arabiya described overnight ground fighting along its border as the “largest attack” yet by Houthi forces and Yemen’s republican guard, a unit close to Saleh.

“It was the first confrontation undertaken by Saleh’s (Republican) guard, and coalition planes and Saudi Apache (helicopters) undertook ground fire for 10 hours,” a military spokesman told the network.

Saudi-led forces said on Friday that four Saudi troops, including an officer, were killed after an attack was launched from the Yemeni side on border areas in Jizan and Najran.
Reuters