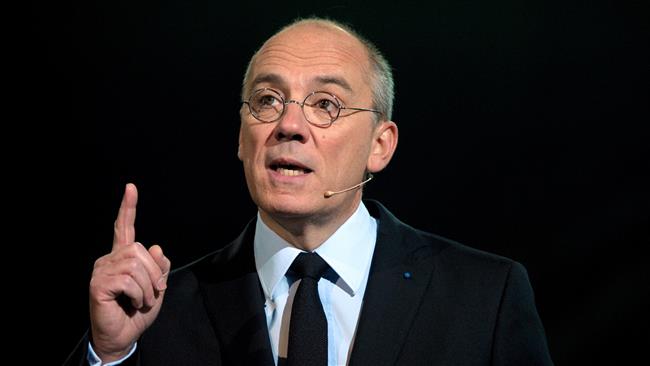 Stephane Richard the chief executive and chairman of French telecom giant Orange said Orange will certainly stop its joint business with (Israel’s) Partner. “Our intention is to withdraw from Israel. It will take time,” Richard said, adding, “For sure we will do it… I am ready to do this tomorrow morning… but without exposing Orange to huge risks.”
Share:

French telecom giant Orange SA’s declaration that it wants to cut business ties with Israel has given a boost to the burgeoning anti-Israel boycott movement while also drawing a sharp rebuke from Prime Minister Benjamin Netanyahu on Thursday.

The move bodes poorly for Israel at a time of growing international anger over its West Bank settlements and could potentially put almost any Israeli company in the crosshairs of the boycott campaign. It also has illustrated just how deeply intertwined Israeli settlements are with the rest of the country.

Netanyahu responded angrily on Thursday, calling on “the French government to publicly repudiate the miserable statement and miserable action by a company that is under its partial ownership.”

The remarks came a day after Orange’s chief executive Stephane Richard said he would end his company’s relationship with Partner Communications Ltd. “tomorrow” if he could, but that he was bound by a contract for the time being. He cited the company’s sensitivity to Arab countries. Partner licenses the Orange brand name in Israel.

“The absurd drama in which the democracy that observes human rights — the state of Israel — and which defends itself from barrages of missiles and terrorist tunnels, and then absorbs automatic condemnations and attempted boycotts, this absurd drama will not be forgiven,” Netanyahu also said.

Pro-Palestinian activists in France have been pushing for Orange to end the relationship over Partner’s activities in Israeli settlements. The settlements, built on land the Palestinians want for a future state, are seen as illegitimate by the international community.

With Richard’s comments, Orange appeared to becoming the largest and best-known company to yield to pressure from a global movement calling for boycotts, divestment and sanctions against Israel.
Israeli officials say the so-called BDS movement is not out to promote peace, but instead aims to “delegitimize” the country’s very existence as a Jewish state. They point to the grassroots BDS movement’s support for millions of Palestinian refugees to return to ancestors’ homes in what is now Israel. Israel rejects the “right of return,” saying it would end the country’s character as a Jewish and democratic state.

In a statement issued in Paris, Orange said it sought to clarify that it wants to pull out of Israel for business reasons, not political ones.

The company said it doesn’t want to maintain a presence in countries where Orange itself is not a phone provider, and that the move is “in conformity with its brand policy.” Orange said it “has no reason to take part … in a debate of a political nature.”

Culture Minister Miri Regev called on the French government to “show zero tolerance for anti-Semitism.” She also urged Jewish customers of Orange in France and around the world to drop their service and switch carriers.

The French government, which did not immediately comment on Richard’s announcement, has good relations with Israel and accusations of anti-Semitism are a sensitive issue — especially in the wake of attacks by Islamic radicals who killed 17 people in a kosher supermarket and a satirical newspaper in January. France is home to Western Europe’s largest Muslim and Jewish communities and has sought to maintain good ties with Israel’s government as well as Arab allies.
At the same time, the BDS movement has been active in France, and staged a protest at Orange’s annual shareholder meeting last month. Activists have also called attention to activities in Israel of French companies Danone, L’Oreal, hotel chain Accor and energy company Veolia.

Orange, one of the world’s largest telecom companies, provides mobile phone services in about 30 countries. It says it has about 200 million customers worldwide, and declared revenue last year of 39 billion euros ($44 billion). The French government holds a roughly 13.5 percent stake in Orange.

The BDS movement has been showing increasing signs of traction. Several high profile artists have canceled performances in Israel and the movement has also become increasingly popular on U.S. college campuses.

“The boycotters of Israel are not looking … to partition the land of Israel, but to erase the state of Israel,” Justice Minister Ayelet Shaked said this week. “This is anti-Semitism under a new guise.”

The BDS gains have accompanied an official Palestinian campaign of targeting Israel in international institutions like the United Nations and the International Criminal Court. Last week, Israel fended off a Palestinian attempt to kick it out of the global soccer body FIFA.

The Palestinians say such tactics are necessary after more than 20 years of failed peace efforts. The Palestinians claim the West Bank, east Jerusalem and the Gaza Strip — lands captured by Israel in the 1967 Mideast war — for their state. With more than 550,000 Israelis now living in settlements in the West Bank and east Jerusalem, they say that time is running out for a two-state solution.
“The Israeli reaction to the boycott movement means that our political movement began to affect them and to scare them,” said Nabil Shaath, a senior Palestinian official.

Partner was targeted because it keeps communications equipment in the West Bank that serve Jewish settlers. It also “sponsored” Israeli military units that took part in last year’s Gaza war by giving soldiers discounted service. Many local companies have similar partnerships in Israel, where military service is mandatory.

But virtually any Israeli company could come under scrutiny. Israeli banks, for instance, have branches in settlements and lend mortgages to residents. Israeli gas stations and supermarkets operate in settlements, and every major company is likely to employ someone who lives in a settlement.

Isaac Benbenisti, the incoming chief executive of Partner Communications, said he was “outraged” by Orange’s decision. “The story is not a story about Partner and Orange. The story is a story about the state of Israel that is under a worldwide attack, mainly in western Europe, by sources that want to hurt us,” he told The Associated Press.

As Netanyahu faces growing pressure to re-launch peace talks, he must now also search for a formula that can address the world’s anger over the settlements while keeping his new government intact. The narrow coalition is dominated by pro-settler hardliners who oppose Palestinian independence.

Since winning re-election, the Israeli leader has tried to backtrack on a campaign statement that he would not allow the establishment of a Palestinian state on his watch. Earlier this week he renewed a call to restart peace talks without any preconditions. But so far, few leaders appear to be taking him seriously. In an Israeli TV interview, President Barack Obama said the international community remains skeptical.

U.S. Ambassador Dan Shapiro told Israel’s Army Radio on Thursday that Washington would continue to oppose “inappropriate one-sided criticism against Israel.” But he said this job would be harder to do because peace negotiations are not taking place.

“Talks were always the most effective tool to beat these efforts,” he said. “So if we don’t have any talks now, and most of the world doesn’t think they will take place anytime soon, how can we fight boycott, sanctions and delegitimization, and how can we keep two state solution realistic?”