Explosion at gas station in Ghana kills at least 73 people 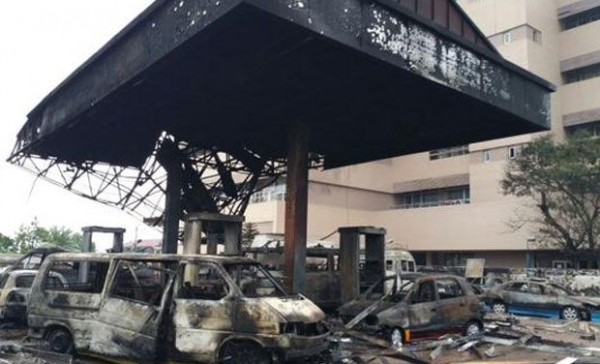 ACCRA, Ghana  — A gas station in Ghana’s capital blew up while many people were sheltering there from a torrential rainfall and flooding, killing at least 73 people and leaving a gruesome scene with charred bodies and neighboring buildings set alight, authorities said Thursday.

The cause of the overnight explosion was not immediately known. Neighbors said many people had gone to the station amid heavy flooding in the area.

“We are still trying to salvage the site of the accident before we can come out with an accurate figure,” Anaglate told journalists, referring to the death toll.

Graphic footage aired on national television early Thursday showed corpses being piled into the back of a pickup truck and other charred bodies trapped amid the debris. Neighboring buildings that had caught fire burned into the night as floodwaters around the site hampered recovery efforts.

“Many people took shelter under a shed at the station during a severe rain across the country and got trapped when the explosion happened,” Michael Plange, who lives a few blocks away, told The Associated Press.

The explosion occurred near the Kwame Nkrumah Circle, in the center of Accra.

Police public affairs officer Cephas Arthur told the public to stay away from the scene.

“We must allow the Fire Service and National Disaster Management Organisation to work to find trapped bodies at the scene of explosion,” he said.

State radio reported that Accra and other cities across the country have been flooded.