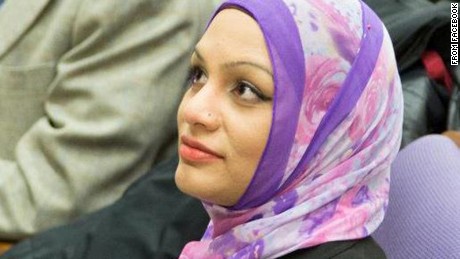 A social media campaign gained strength on Monday for a Muslim chaplain at Northwestern University who said she was denied an unopened can of soda on a United Airlines-affiliated carrier after a flight attendant told her it could be used as a weapon.

Referring to the incident last week, Tahera Ahmad said in a Facebook post the flight attendant had discriminated against her and that she was the subject of anti-Islamic hatred by other passengers on the flight from Chicago to Washington.

Bob Birge, a spokesman for Republic Airways Holdings, which operated the Shuttle America flight on behalf of United, told cable news channel CNN on Monday that the airline’s beverage policy does not prohibit serving unopened cans to passengers.

Ahmad has garnered global support on Twitter at #UnitedforTahera, where many have urged a boycott of the airline.

United spokesman Charles Hobart said a flight attendant attempted several times to accommodate Ahmad’s beverage request after a misunderstanding regarding a can of diet soda.

“We spoke with Ms. Ahmad on Saturday to get a better understanding of what occurred and to apologize for not delivering the service our customers expect when traveling with us,” Hobart said.