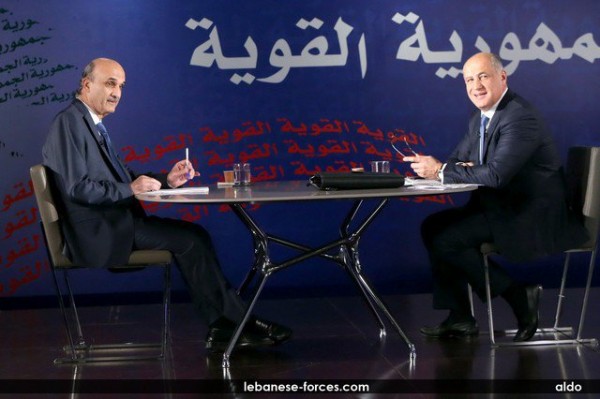 Lebanese Forces leader Samir Geagea warned Thursday that Hezbollah’s fighting alongside the forces of the regime of Syrian president Bashar al Assad Syria and the judicial verdict against former minister Michel Samaha are key factors that encourage the presence of extremist groups in Lebanon such as such as the Islamic State of Iraq and Syria (ISIS).

“ Hezbollah’s presence in Syria and a verdict such as Michel Samaha’s verdict are factors that pave the ground for the presence in Lebanon of groups similar to the IS ,” said Geagea in an interview on LBCI’s talk show ” Kalam el-Nass with Marcel Ghanem.

“If we want to fight terrorism, we must protect and help moderate Sunnis in Lebanon. This cannot happen through fighting in Syria or Yemen or through issuing a verdict similar to Samaha’s verdict,” he stressed.

Geagea was responding to Hezbollah chief Hassan Nasrallah’s Sunday remarks , in which he warned that Future Movement and its leaders and the March 14 forces would be “the first victims” if the Islamic State and al-Nusra Front take a foothold in Lebanon.

Addressing Lebanon’s Christians, Nasrallah asked: “Who will protect your women from enslavement and your churches from destruction?”

Geagea snapped back on Thursday. “We don’t want anyone to protect the churches of Christians in Lebanon. Has Nasrallah defended Syria’s Christians and or prevented the enslavement of women in Iraq? We have men who know how to defend,” he said.

“We don’t want anyone to protect the churches of Christians in Lebanon. Has Nasrallah defended Syria’s Christians and or prevented the enslavement of women in Iraq? We have men who know how to defend,” Lebanese Forces leader Samir Geagea said in an interview on LBCI’s talk show ” Kalam el-Nass with Marcel Ghanem..

In response to a question, Geagea revealed that he has concerns over possible “assassinations against Future Movement leaders to scare people and tell them ‘it is the IS.’”

Commenting on the situation in the northeastern border town of Arsal, Geagea stressed that the Lebanese army “has the ability to control the situation” and that “there are no indications that the IS will enter Lebanon.”

“The army is deployed in all the corners of Arsal,” he stressed.

On Sunday, Nasrallah hinted that his group would intervene militarily in Arsal’s outskirts to oust the militants of the IS and al-Nusra if the Lebanese state failed to do so.

“Does Sayyed Hassan know about Arsal more than its residents? Who represents Arsal, Future Movement or Hezbollah?” Geagea asked on Thursday.

“If there are terrorists in Arsal, let Sayyed Hassan give their names to the army so that it performs its duty,” he said.

“Hezbollah is on talking terms with (Interior Minister) Nouhad al-Mashnouq, so why don’t they talk with him about the issue of Arsal instead of launching this media campaign?” wondered Geagea.

Geagea called on Nasrallah to stop using the threat of ISIS to scare the people of Lebanon.

“My chances are low but not nonexistent and from the very first moment I did not insist on my nomination. I said if there is a presidential race, I’m willing to nominate myself, but noted that I would congratulate the winner,” he added.

“My nomination was not at any moment aimed at blocking (Free Patriotic Movement chief MP Michel) Aoun’s candidacy and it was a normal thing for me to run for the presidency,” Geagea noted.

Asked about the characteristics of a good president, Geagea said “a real president is one who respects the Constitution and the laws, who has courage and who has a vision to overcome the current crisis.”

“I agreed with Aoun on coordinating our stances regarding the characteristics that the next president must enjoy and we didn’t agree on the principle of picking a third candidate,” he revealed.

Geagea also insisted that “the (parliamentary) quorum for the election of a president during the first (voting) session is 64+1,” noting that “this debate has been running for 50 years in Lebanon.”

“Boycotting sessions is not the right approach and any constitutional article not confined to a certain quorum should follow the half+1 rule,” said Geagea.

He also lamented that “Hezbollah will not endorse any president that it does not want.”

“But we will maintain our stance that calls for a strong republic,” Geagea pledged.