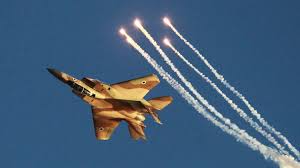 The airstrikes were in response to an attack Tuesday night in which a rocket was launched at Israeli territory from the Gaza Strip, Lerner said. The rocket hit an open area in the Lakhish regional council, and no injuries were reported, he said. Sirens wailed in several southern Israeli communities at the time of the attack.

Earlier, a Hamas official said that unknown militants in the Gaza Strip fired at least one rocket at Israel. The official spoke on condition of anonymity as he wasn’t authorized to brief journalists about the fired rocket.

No Palestinian group has claimed responsibility for Tuesday’s rocket attack.

Early Wednesday, witnesses reported hearing explosions from the Israeli airstrikes in different parts of the northern and southern Gaza Strip.

The airstrikes are the first since a ceasefire between Israel and Gaza militants took effect following the end of a 50-day war last summer. However, Palestinians say Israel forces have regularly fired at farmers near the border fence and at fishermen off the Gaza coast. The shootings have killed a Palestinian fisherman and a farmer.

Hamas has fired thousands of rockets at Israel over the years. But rocket fire has mostly stopped since the end of last summer’s war between Gaza militants and Israel.

Other militant groups have fired rockets since then, but Israel holds Hamas responsible for all attacks coming out of Gaza.

Lerner said Wednesday’s airstrikes “are a direct response to Hamas and the aggression against Israeli civilians originating from the Gaza Strip.”

“The reality that Hamas’ territory is used as a staging ground to attack Israel is unacceptable and intolerable and will bear consequences,” he said. “Israelis cannot be expected to live in the perpetual fear of rocket attacks; the IDF will continue to operate in order to seek out those that wish to undermine Israeli sovereignty with acts of terrorism.”