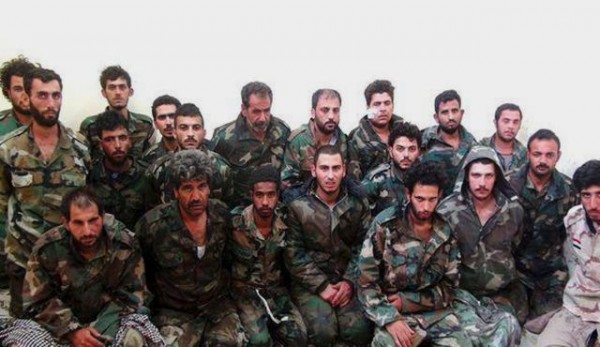 Syrian government soldiers who were captured by ISIS militants in the Palmyra area, in a picture released on May 24, 2015, by a militant website. Photo by AP
Share:

Syria’s air force carried out at least 15 strikes in and around the central city of Palmyra early on Monday, targeting buildings captured by Islamic State, a group monitoring the war said.

Fighters from the militant group overran the ancient city, the site of some of the world’s best preserved Roman ruins, last week. They have killed at least 217 people execution-style in the area since May 16 including children, the Britain-based Syrian Observatory for Human Rights said.

This was in addition to at least 300 soldiers killed by Islamic State in fighting leading up to the city’s capture, according to the Observatory’s toll.

It said the hardline group had detained around 600 soldiers, pro-government fighters and those accused of being loyalists in and around the city, also a key military gain as it stands on a crossroads to the cities of Damascus and Homs.

The air force carried out raids on targets including the military intelligence building and the city hospital, said Observatory founder Rami Abdulrahman, who gathers information from a network of sources on the ground.

Islamic State supporters have posted videos online which they say show fighters going from room to room in government buildings in Palmyra, also known as Tadmur, searching for troops and pulling down pictures of President Bashar al-Assad and his father.

They have also posted pictures claiming to show the Islamic State flag raised over the ancient citadel in Palmyra, which U.N. cultural agency UNESCO describes as the site of a historical crossroads between the Roman Empire, India, China and ancient Persia.

The Sunni Muslim militants seized the city of 50,000 people on Wednesday, days after also capturing the city of Ramadi in neighbouring Iraq.

The two advances were Islamic State’s biggest successes since last summer, when a U.S.-led coalition started carrying out air strikes against its fighters in both countries, forcing the alliance to examine whether that strategy is working.

The White House has said the seizure of Palmyra was a setback in the fight against Islamic State, but spokesman Josh Earnest said President Barack Obama disagreed with Republicans demanding he send ground troops to fight the group.