Obama: Israel’s government should live up to the nation’s founding ideals 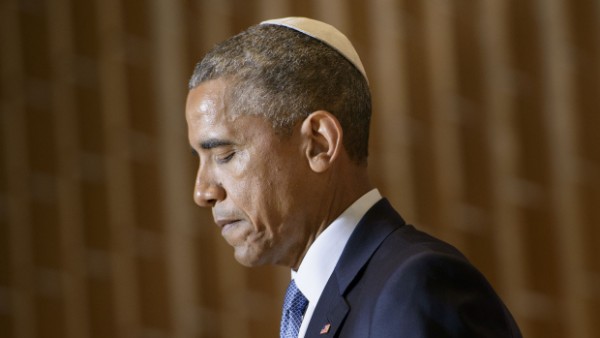 US President Barack Obama pauses while speaking at the Adas Israel Congregation May 22, 2015 in Washington, DC. AFP PHOTO/BRENDAN SMIALOWSKI (Photo credit should read BRENDAN SMIALOWSKI/AFP/Getty Images)
Share:
President Obama made an impassioned appeal to American Jews on Friday, arguing that his approach to the problems in the Middle East flows from an interpretation of Jewish values that he has adopted as guiding principles in his own life.

The 29-minute speech at Adas Israel Congregation in the District, which was just the fourth time that an American president has addressed a congregation at a U.S. synagogue, underscored the personal stake Obama has in strengthening his relationship with some segments of the country’s Jewish community.

The president addressed a range of policy issues — including the ongoing nuclear talks with Iran and the stalled Israeli-Palestinian peace process. But at its core, the speech was a plea for understanding that his criticisms of Israel’s government stem from his belief that the country must live up to “the type of nation that it was intended to be in its earliest founding.”

In the same way Obama has framed American exceptionalism as the nation’s ability to recognize its own failings and correct them, the president framed Israel’s identity as a struggle across millennia to provide a haven where “everybody has a place, everybody has rights, everybody is a child of God.”

In the run-up to Friday’s speech — which marked Jewish American Heritage Month, a national commemoration aimed at educating the public about the role Jews have played over the course of U.S. history — several of the president’s allies had urged him to forge a more emotional connection with advocates who are uneasy about his overtures to Iran and his recent criticism of Israeli Prime Minister Benjamin Netanyahu.

Sporting a yarmulke — the skullcap Jewish men wear as a sign of respect for God in temple — the president began by joking about being “an honorary member of the tribe” but later spoke seriously about the formative influence Judaism had on him as a young man focused on achieving social justice.

He said he looked upon Israeli leaders Moshe Dayan and Golda Meier with admiration: “The notion of pioneers who set out not only to safeguard a nation, but to remake the world . . . and those values, in many ways, came to be my own values,” he said.

Speaking from the bema, a platform from which religious services are conducted in synagogues, he added: “They believed the story of their people gave them a unique perspective among the nations of the world, a unique moral authority and responsibility that comes from having once been a stranger yourself.”

Obama defended his push for a two-state solution as a way of honoring that legacy, even as he acknowledged that “the Palestinians are not the easiest of partners” in the peace process, prompting laughter from the nearly 1,200-person audience.

“I want to be clear that, to me, all these things are connected. The rights I insist upon and now fight for, for all people here in the United States, compels me then to stand up for Israel and look out for the rights of the Jewish people,” he said. “And the rights of the Jewish people then compel me to think about a Palestinian child in Ramallah that feels trapped without opportunity. That’s what Jewish values teach me.”

The president received a warm reception at the event, which had the feeling of a group gathered
at synagogue for a teenager’s ­coming-of-age ceremony. In the hours before the president spoke, attendees chatted excitedly, until a Jewish a cappella group from the University of Maryland, Rak Shalom, began performing on the bema.

The singers tossed out jokes as they introduced songs: One of them noted that he had just graduated and still didn’t have a job — “If you’re looking for a new president, I’m unemployed,” — while another noted that since they were looking for financial sponsors, they were open to changing their name to “Barack Shalom.”

But the event — which also marked the first Solidarity Sabbath, an effort by the leaders of European and North American countries to confront rising anti-Semitism — had a graver side as well. Half a dozen ambassadors from countries including Georgia, Germany, Hungary, Sweden and Spain attended the speech.

Katrina Lantos Swett, president of the Lantos Foundation for Human Rights and Justice, the group that created Solidarity Sabbath, said 16 governments had agreed to observe the occasion, given open acts of anti-Semitism such as this year’s attack on a kosher market in Paris and a Jewish student at the University of California at Los Angeles being questioned about whether she could be an impartial member of student government because of her affiliation with Jewish groups on campus.

Obama met privately before his speech with that UCLA student, Rachel Beyda, along with several national Jewish leaders in the synagogue’s beit midrash — a small chapel and study center. Beyda said in an interview that Obama “didn’t bring up the issues that I’ve had” on campus, but she “appreciated” the fact that he spoke out against anti-Semitism during the course of his speech.

There is no question that the president’s remarks connected with more-progressive members of the nation’s Jewish community, who have consistently backed the administration’s policies.

Adas Israel’s Rabbi Gil Steinlauf introduced Obama in glowing terms, calling him a “champion of freedom and justice . . . and a great friend of the Jewish people.”

Obama also spoke privately in the beit midrash with Steinlauf, where the two discussed the concept of the “havruta,” in which two Jews study the Torah and debate its meaning.

The president “was really interested in that,” Steinlauf said, recalling how he explained before an open Torah how this exchange is as much about the relationship between the two people as the conclusions they would reach.

“I thought it was a very powerful moment, a sacred moment,” Steinlauf said.

But it appears unlikely the president can change the minds of more-conservative American Jews, or of those in Israel.The Israeli ambassador to the United States, Ron Dermer, was invited but did not attend; embassy spokesman Aaron Sagui said he was “out of Washington on a previously scheduled trip” and could not return in time to make it for the speech.

Nathan Diament, executive director of the Orthodox Union Advocacy Center and a friend of the president’s from their days together at Harvard Law School, said the speech was “an accurate reflection” of Obama’s views of Judaism, and “it will very much resonate with Jews on the left who share that perspective.”

“At the same time, there are those in the Jewish community who view a double standard being applied to Israel as unfair,” he said. “For those who view it in that way, they will be troubled.”