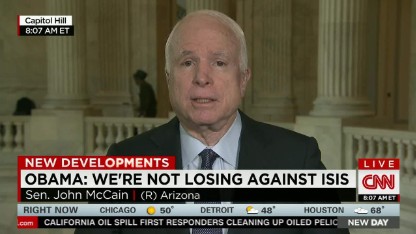 Arizona Sen. John McCain called President Barack Obama’s declaration that the U.S. isn’t losing the fight against ISIS “mind-boggling” in an interview on CNN on Friday.

In reality, McCain said on CNN’s “New Day,” “the President’s strategy is certainly not succeeding — it’s an abject failure,” one that will eventually bring Americans around to the prospect of deploying boots on the ground in Iraq.

“It’s mind-boggling that the President could keep saying, and (administration officials) could keep saying what they’re saying while thousands of people are being butchered, burning bodies in the streets, executions, beheadings,” he said.

“This is a disaster. It was predicted by me and Sen. Lindsey Graham, and it’s going to go on until we develop a strategy.”

Such a strategy, in McCain and Graham’s mind, would require the deployment of 10,000 U.S. troops to help Iraqis fight back the terrorist group, which has made significant advances over the past week. Last weekend, ISIS forces took over the key Iraqi city of Ramadi, a development that the Pentagon labeled a “failure.”

But in an interview with the Atlantic published Thursday, Obama said there were challenges in Iraq but expressed confidence in his overall strategy to combat ISIS.

“No, I don’t think we’re losing,” he said, but acknowledged: “There’s no doubt there was a tactical setback” in Ramadi.

Polling has shown that support for ground troops to fight ISIS hasn’t yet topped a majority of Americans, but it’s growing, with 47% showing support for such a prospect in a February CNN/ORC poll. But McCain said that the continued brutality from ISIS forces against American hostages and others would eventually change Americans’ minds.

McCain also expressed confidence that the Senate will figure out a way to extend the PATRIOT Act, which will expire at the end of the month if lawmakers can’t overcome an impasse over government surveillance programs. Senate Majority Leader Mitch McConnell has floated weekend votes on the bill if lawmakers can’t come to a compromise on Friday, and McCain said that when gridlock threatens lawmakers’ weekends, “the spirit of conciliation and compromise typically rises to the surface.”

McCain acknowledged that the “cynicism” revelations from government whistleblower Edward Snowden revealing the extent of NSA surveillance programs inspired in Americans was understandable.

“So it has to be explained better to the American people. That is a job for those of us in Congress, and it’s also a job for the president of the United States,” he said.