Why U.S. strategy to take on ISIS isn’t working ? 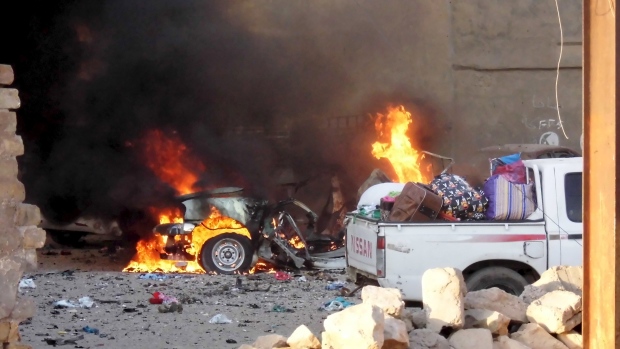 By Andre Mayer, CBC News
The recent capture of Ramadi in central Iraq by ISIS fighters has prompted heated discussion around the world about the significance of the city – just 120 kilometres from Baghdad — in the fight against the Sunni jihadists.

Many military analysts say Ramadi’s capture represents a devastating blow to the anti-ISIS coalition, while the U.S. government casts it as only a minor setback.

Most experts agree, however, that losing Ramadi – in the heartland of Sunni Iraq — raises serious questions about the efficacy of the current U.S. strategy.

The takeover of Ramadi “is a significant victory for ISIS that essentially shows the failure of the U.S. effort,” says Marina Ottaway, a senior scholar at the Woodrow Wilson International Centre for Scholars in Washington, D.C.

The feeling is that the U.S. reliance on airstrikes and an unstable Iraqi army has not had the desired outcome of degrading ISIS, she says.

Peter Mansoor, a retired U.S. Army officer, says the loss of Ramadi is ultimately the responsibility of the Iraqi government. But it does show that “the U.S. strategy to defeat ISIS is simply not working. It’s too little and not sustained enough.”

Fighters with the Islamic State in Iraq and Syria captured the city, which had been defended by Iraqi forces, on Sunday. It was the culmination of a campaign that began in October.

The capital of Anbar Province, Ramadi is a key communications hub along the Euphrates River corridor that links ISIS territory in Syria with central Iraq, says Mansoor.

It is also the heartland of important Sunni tribes, many of whom have felt sidelined in recent years because of their former support for Saddam Hussein and the recent shift to Shia-controlled Baghdad in post-invasion Iraq.

For its part, the Obama administration has played down the significance of Ramadi’s fall, with White House spokesman Josh Earnest saying the existing strategy has “yielded important successes.”

Earlier this week, however, former U.S. defence secretary Robert Gates lamented, “We don’t really have a strategy at all. We’re basically playing this day by day.”

The U.S. joined the fight against ISIS last summer, after the Sunni militants stunned the world by conquering a swath of northern Iraq, including larger centres such as Tikrit and Mosul, and threatened to take the capital, Baghdad.

Since then, the U.S. has been part of a wide-ranging multinational coalition that includes the Iraqi army as well as countries such as Great Britain, France, Canada and Jordan.

All along, U.S. President Barack Obama has expressed reluctance to put American soldiers on the ground, arguing that Iraqi security forces are best positioned for close combat.

However, reports suggest the Iraqi army more or less abandoned Ramadi in the face of encroaching ISIS fighters, much as it did in when ISIS bore down on Mosul last summer.

The capability and resolve of the Iraqi army, which has been largely trained by the U.S., has been an ongoing concern. The U.S. effectively shut down the Iraqi military, particularly its senior Baathist Party ranks, after the fall of Saddam Hussein in 2003.

Since being rebuilt, it has been seen as a largely Shia fighting force, and does not command the trust of many of Iraq’s Sunnis, says Ottaway.

The fall of Ramadi has also brought on a surge of criticism of Washington’s tactical strategy, which has been essentially to repel and degrade ISIS forces in Iraq through targeted air strikes.

Up until now, the U.S. has been wary of the participation of Shia militia, such as the Asaib Ahl al-Haq (The League of the Righteous), pictured here, in the fight against the Sunni militants of ISIS. (Haidar Mohammed Ali/AFP/Getty Images))

While air support has helped the Iraqi military retake Tikrit, it is inherently limited, says Seth Jones, director of the International Security and Defence Policy Centre at the Rand Corporation in Washington.

Trying to take out large numbers of extremists from above is only possible when fighters mass in large groups.

The New York Times reported earlier this week that during its offensive on Ramadi, ISIS took advantage of a sandstorm that grounded U.S. warplanes — thereby depriving Iraqi forces of air support — to finally seize the city.

One of the sticking points for the U.S. has been the involvement of Shia militias, most of which are funded, if not directed, by Iran. Many of them have a fearsome reputation as fighters, and given the sectarian battles that ISIS has been waging, Shia paramilitaries are highly motivated.

For a long time, the U.S. has been unwilling to conduct airstrikes in support of Shia militia at the risk of looking like Iran’s air force, says Mansoor, the author of Surge: My Journey with General David Petraeus and the Remaking of the Iraq War.

But the White House may be changing its tune, he says.

“What I’ve seen coming out of Washington in recent days is that we will provide air power to whatever formation the Iraqi government deems it necessary to support.

“And I think that’s code language to basically say that we will support the Shia militias when they go in and try to retake Ramadi.”

Regardless of what the U.S. decides to do next, the bigger problem is that, dating back to at least the first Gulf war, the Americans have misunderstood the ethnic, sectarian and tribal dimensions of the region, says Noumane Raboudi, a specialist in Middle East politics at the University of Ottawa.

“They’re always obliged to declare another war to correct the mistakes of the last war, and it’s not working.”
CBC News