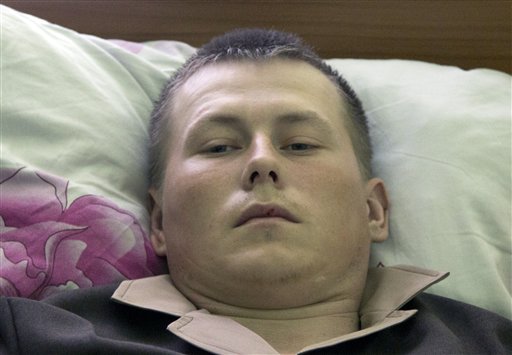 Alexander Alexandrov, who says he is a sergeant with the Russian special forces from the Volga River city of Togliatti, lies in a military hospital bed, in Kiev, Ukraine, Tuesday, May, 19, 2015. Two wounded Russian soldiers captured while fighting in war-torn eastern Ukraine have been transferred to a hospital in Kiev, Ukrainian officials said Monday as Moscow once again firmly denied any involvement in the fighting. (AP Photo/Efrem Lukatsky)
Share:

KIEV, Ukraine (AP) — Lonely and hurting, two men lie in narrow beds in a Kiev hospital as controversy swirls around them.

The men say they are Russian soldiers who were captured and wounded while on active duty in the rebellious east, Ukrainian authorities say they are definitive proof that Russia is at war in Ukraine, and Moscow hotly denies the claims.

Representatives of Amnesty International and the Organization for Security and Cooperation in Europe, which has shepherded a shaky cease-fire in eastern Ukraine, visited the men Tuesday and found them apparently in reasonable condition.

“I got professional medical aid, surgery. To my relatives, I want to say everything is fine with me, I’m alive and well,” said one, who identified himself as Yevgeny Yerofeyev, a captain in the Russian army.

“I’m missing my family and relatives so much,” the other, Sgt. Alexander Alexandrov, told reporters who accompanied the international representatives.

In video statements posted by the Ukrainian Security Service, the men say they were taking part in a reconnaissance operation in the Luhansk region Saturday when they were fired on, wounded and captured. Both say they were members of an army brigade based in the Russian city of Togliatti and had been deployed in Ukraine for more than a month; Smirnov said he was part of a battalion of 220 soldiers.

Throughout the yearlong fighting in eastern Ukraine in which at least 6,100 people have died, Russia has consistently denied assertions from Kiev and the West that Moscow is providing soldiers and equipment to back up the pro-Russia rebels. The statements by Yerofeyev and Alexandrov directly challenge that denial.

Both the Kremlin and the Russian Defense Ministry reject the assertion that Yerofeyev and Alexandrov are Russian soldiers. A Defense Ministry spokesman said Monday that they were former soldiers; Russia has said that any Russians fighting in Ukraine are there only as volunteers.

It remains unclear what measures Moscow will take for the two hospitalized men. Lubkivskiy said that as of Tuesday, “we did not get any request from the Kremlin or the Russian Federation about captured soldiers. … For the moment, there is no question about a transfer” of the men to Russia.

Amnesty International’s Ukraine spokesman, Bogdan Ovcharuk, was quoted by the Interfax news agency as saying the two men have asked to see the Russian consul. But no consular visit has been reported.

In Washington, White House Press Secretary Josh Earnest said the U.S. continues to be disappointed by “Russia’s destabilizing activity in Ukraine,” including the flow of Russian materiel and troops across the border. He said the U.S. and its European partners were resolute about the economic sanctions they have imposed on Russia. Earnest added that Russia’s actions would be discussed when U.S. and G-7 the leaders meet in Germany next month.

Pavel Felgenhauer, a Russian military analyst, suggested that Russia may try to work out an exchange for the two. Ukraine has repeatedly called for the release of Nadezhda Savchenko, a military officer jailed in Russia for nearly a year on charges that she aided a mortar attack that killed two Russian journalists in Ukraine.

Felgenhauer also told The Associated Press that “The only person who could really make a decision to declassify any Russian involvement in Donbass (eastern Ukraine) is President Vladimir Putin.”

In Samara, the capital of the Russian region that includes Togliatti, residents appear willing to believe their government’s claim that the only Russians fighting in Ukraine are volunteers.

“I support those who voluntarily go to the Donetsk People’s Republic and fulfill their mission,” said resident Vladimir Stolyarov, using the name of one of Ukraine’s two self-declared separatist governments.

Ukraine’s military said their positions came under artillery and mortar fire Tuesday in several locations in the east despite the cease-fire that was brokered in February. It did not state if there were casualties.