Russian embassy in Damascus comes under attack . Damages but no injuries 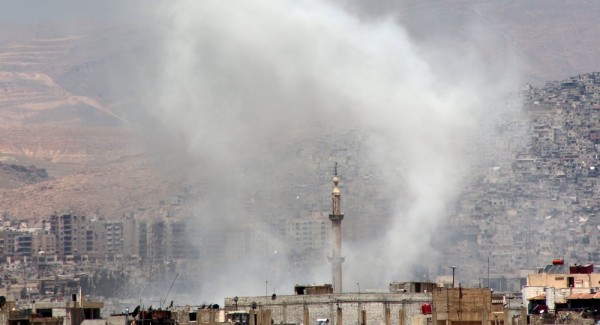 Two mortar rounds landed on the premises of the Russian Embassy in Damascus on Tuesday afternoon, causing damage but no injuries, because the shelling took place during the lunch break embassy’s spokeswoman Asiya Turuchiyeva told RIA Novosti.

“Two mortar rounds landed on the embassy’s territory, one of them fell near the main entrance, the other hit an administrative building,” she said.

Syrian authorities have immediately responded to the accident and promised to take all necessary measures to ensure the safety of the Russian embassy.

“What happened is but a series of daily terrorist attacks against Syria; Russian embassy is not an exception. Russia, China and the other BRICS countries are friends of Syria and everything related to them is being attacked on Syrian territories. Different institutions came under attack since the war has started, schools were bombed, too. It is not the first time when the terrorist organizations attack the Russian embassy,” Supervisor Minister of Information Ali al-Ahmad told Sputnik.

Last mortar attack on the Russian embassy took place in January this year with a shell hitting the roof of the consulate’s building.

Russia considers mortar fire on its embassy in Damascus a terrorist act and calls on all parties that have influence on extremists in Syria to prevent terrorist attacks, the Russian Foreign Ministry said in a statement on Tuesday.

“Fortunately, none of embassy employees were injured… We view the incident as a terrorist act directed against the Russian Embassy, and strongly condemn its perpetrators, organizers and instigators. We reaffirm our solidarity with the Syrian authorities in their efforts to combat the terrorist threat on the Syrian territory.”

The ministry also called on the international community to give due assessment to this act of terror and urged an immediate cessations of such actions, as well as armed violence in the crisis-hit country in general.

The 15-member council stressed that host countries have an obligation to “take all appropriate steps to protect diplomatic and consular premises.”

The council also stressed the need to bring the perpetrators of the attack to justice.

Joining the condemnation was the United States, which also renewed calls for a political solution to end the bloody Syrian conflict.

“We call for those responsible for all such acts to be held accountable and continue to stress the need for a political solution to the turmoil in Syria,” said Jeff Rathke, a State Department spokesman.

Russia is one of the last allies of the Syrian regime, as the country struggles with a civil war that has killed hundreds of thousands of people in four years.