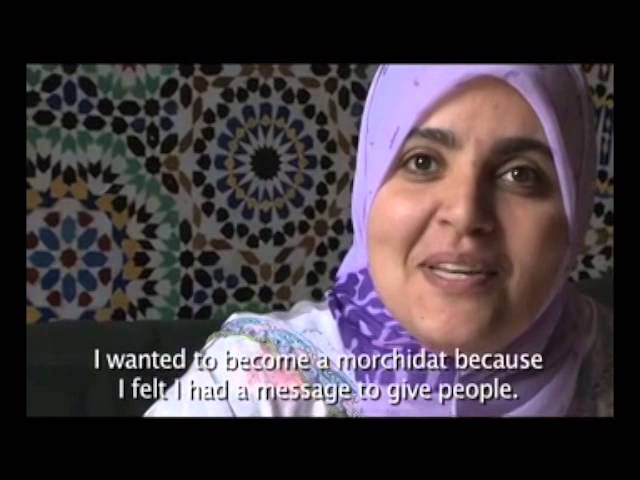 Girls are “like a timebomb ready to explode and ruin the family’s reputation”, the Moroccan jewelry trader tells his customer as she admires a display of necklaces.

The solution is to “get rid of this bomb” by marrying your daughters off as soon as you can, he explains.

His customer, Hannane, replies firmly that Islam does not advocate child marriage and that women can also play an important role outside the home.

Hannane is one of a new generation of female religious leaders, known as morchidat — part of a quiet social revolution in the North African country.

Their groundbreaking work is the subject of a British film, “Casablanca Calling”, which will be showcased on Tuesday night at an international conference on child marriage in Morocco’s famous port city.

The morchidat were introduced in 2006, partly in an attempt to counter Islamist radicalism following suicide bombings that rocked Casablanca in 2003.

The hope is that these female spiritual leaders can both encourage a more tolerant Islam and improve the position of girls and women in Moroccan society.

“The morchidat are a rare experiment in the Muslim world,” the film’s Moroccan associate producer Merieme Addou told the Thomson Reuters Foundation.

“It’s the first time in a Muslim country that a religious role has been given to a woman.”

The morchidat give guidance to women and young people in mosques, schools, orphanages, hospitals, prisons and rural villages.

But Addou says they have their work cut out as they try to overcome the many problems facing Moroccan society.

“So many cultural traditions — from early marriage to women’s education — have become confused with religious teaching and it is challenge to separate them in people’s minds,” she adds.

The scene in the jewelry shop reflects some of the views the morchidat are trying to tackle.

“Morocco and other Muslim countries have been living in a long period of ignorance and stagnation,” says Hannane. “Many people knowingly or unknowingly have blocked the most basic rights Islam gives women.”

Although Morocco has outlawed marriage under 18, early marriage is a common problem encountered by the morchidat.

In a classroom, a teenager tells Hannane she has been promised to a boy since she was four years old and that it is becoming difficult to continue at school. “My family say now I’m getting married I shouldn’t leave the house,” she says.

The morchidat tells her that when it comes to marriage “God has given a woman the right to choose for herself” and that the girl should stand up to her father using Sharia law to support her rights.

There are now more than 400 morchidat working across Morocco. Addou says it is the first time women have had someone to talk to about spiritual, moral, social and personal issues.

Although the morchidat are outspoken on women’s rights, she says they are not seen as a threat because what they say is rooted in religion which gives their message legitimacy.

In the rural northern area of Larache, we meet Bouchra, a morchidat who is championing girl’s education.

Women toiling in the fields describe lives of servitude in a region where few girls go to school, illiteracy rates are sky high, misogyny entrenched and domestic abuse not uncommon.

“Women are doomed and then they die,” comments one fieldworker.

In the evenings Bouchra mentors girls at rural boarding schools for the poor. One evening she is called to a dormitory after a student commits suicide. She is told the girl’s father had seen her with a boy and beaten her in front of her friends.

The morchidat initiative is part of wider reforms in Morocco aimed at giving women more rights.

Addou says other Muslim countries are taking an interest in the work of Morocco’s female religious leaders, some of whom have been invited to speak abroad.

One of these is a bright, cheerful woman called Karima, who works in Rabat where she is concerned about the numbers of young people wanting to migrate to the West.

She believes that until young Moroccans feel proud of their Muslim identity and culture, mass emigration and violent extremism will continue.

Addou says “Casablanca Calling”, which is set to air on Al Jazeera this year, provides a glimpse of a world rarely seen in the West.

“My vision of Islam is very different from what many people in the West think,” says Addou.

“Many think Islam oppresses woman and restricts their freedoms, but this is because of traditions that have nothing to do with Islam.

“Men and women are equal in our religion. There is no difference.”