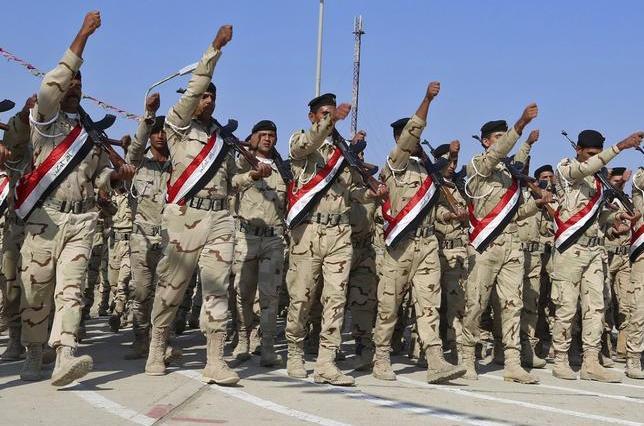 Iraqi army
Share:
By Ishaan Tharoor
Shiite militias have surged into Iraq’s Anbar province, a largely Sunni region, in a government-sanctioned bid to recapture the provincial capital Ramadi, which was seized in entirety by the jihadists of the Islamic State at the end of the last week. Thousands have fled the city, which is less than 70 miles west of Baghdad.

Ramadi’s fall poses a problem for U.S. officials, who have sought to paint a picture of a weakening Islamic State. One Pentagon spokesman told reporters that the city’s capture was part of “complex, bloody fight” where “there are going to be ebbs and flows.”

The sudden advance of the extremist militants into the city’s last government-held redoubts was enabled in part by a series of coordinated car bomb blasts. The panicked retreat that followed seemed a replay of the events of nearly a year ago, when Iraqi forces defending Mosul, the country’s second most important city, melted away in the face of an Islamic State onslaught. The jihadist organization still controls Mosul and has carried out hideous attacks on religious minorities in its surrounding areas.

For all the efforts of a host of factions battling the jihadists on the ground, as well as an extensive campaign of U.S. air strikes and other special forces operations, the Islamic State remains extraordinarily resilient. In comparison, the Iraqi army appears tragically feeble, unable to wage an effective counterinsurgency despite billions of American dollars spent in training and arms, and easily overwhelmed by the militants’ rapid gains.

The original sin, many argue, was the disbanding of the Iraqi army following the U.S. invasion in 2003, which toppled the country’s long-ruling dictator Saddam Hussein. As my colleague Liz Sly reported in a lengthy expose, military officers belonging to Hussein’s Baath party — a nominally secular institution — eventually emerged as the key figures running the Islamic State.

The new Iraqi army, meanwhile, has a reputation for disorganization, corruption, poor leadership and even poorer morale.

“No matter how many billions of dollars you spend you cannot buy experience. You cannot buy legacy. You cannot just manufacture that out of nowhere,” Marine First Lt. Dave Jackson, who fought alongside Iraqi troops on two deployments, told Al Jazeera last year after the fall of Mosul. “They’ve been set up for failure from the beginning.”

But the present failings of the Iraqi army are rooted in more immediate problems.

A lack of equipment and strategic capability

While most of international attention was focused on the Islamic State’s inroads around Mosul and areas closer to the autonomous Kurdish region in northern Iraq, Iraqi government forces have been battling the jihadists in Ramadi for well over a year. The city’s surrender didn’t come out of nowhere: It was the product of a dogged, opportunistic Islamic State campaign to wrest control of all of Anbar, Iraq’s biggest province and once a stronghold of a Sunni insurgency against the American occupation.

It also didn’t help that the Iraqi security forces clinging to Ramadi were apparently ill-equipped and under-prepared for the task.

“The ones to be blamed for this are the government and the local authorities in Ramadi,” said a police colonel who fled the city on Sunday, in an interview with the Guardian. “The army don’t have the fighting spirit. They were there waiting for Isis to attack. They are poorly equipped comparing to Isis. We are fighting with guns and pistols while the Islamic State has Humvees and IEDs and suicide bombers.”

Even with the support of U.S. air strikes, Iraqi forces couldn’t dislodge the extremist militants from their entrenched positions in the province. Part of the problem, as The Washington Post reported last year, is that they weren’t ready to battle an organization with the sophistication of the Islamic State.

The fiction of a unified Iraqi state

The other problem is the country’s sectarian politics. Under previous Prime Minister Nouri al-Maliki, Sunni-majority areas like Ramadi and Mosul were neglected (and embittered) by the Shiite-dominated government in Baghdad. In December 2013, Maliki infamously described Sunni protesters in Ramadi who had been calling for greater autonomy as “al-Qaeda” and sent troops to violently disperse their encampments.

The upheaval unleashed by Maliki’s heavy-handed bungling set the stage for the astonishing, terrifying rise of the Islamic State (and the unraveling of the Iraqi one) in the months that followed.

Maliki’s successor, Prime Minister Haider al-Abadi, has talked the talk, and pledged national reconciliation and unity. But under his watch, the country has leaned heavily on the capabilities of a hodgepodge of Shiite militias, who mustered tens of thousands of men since the fall of Mosul and filled the void left behind by a weak, disintegrating Iraqi army.

The Shiite brigades, known as the “hashd shaabi” or “popular mobilization” units, are to a varying extent backed by Iran and, in some cases, are better equipped than the Iraqi army. They were essential players in the Iraqi government’s recapture of the city of Tikrit, north of Baghdad, earlier this year, a grinding offensive that saw U.S. warplanes operate alongside Iranian proxy units on the ground.

A similar fate now appears to be in store for Ramadi, as Shiite fighters seek to push back the Islamic State, which gleefully dubs its opponents among the militias and Iraqi security forces as “apostates.” There are fears over rights abuses and sectarian atrocities carried out in largely Sunni areas after the Shiite militias “liberate” them from the Islamic State.

The beleaguered Sunni tribes of Anbar, whose “awakening” in 2006 helped subdue al-Qaeda’s insurgency, have been caught in an unenviable position — dealing with the Islamic State jihadists in their midst as well as a worrying Shiite mobilization on their borders.

“We are tired, we want peace, we want to live, and the government is run by thieves and ignorant people,” one Sunni tribal leader from Ramadi told the Guardian.”We are not welcoming [the Shiite militias] in our city. We won’t fight them if they enter, but we are emotionally against them. They are an ethnic militia who will treat us badly.”

This underlying divide plays into the Islamic State’s hands, and underscores the difficulty Abadi’s government has in putting forward a credible, cohesive Iraqi army when there just simply isn’t one.

“The deficiencies of the army cannot be corrected because they reflect the realities of the society,” writes American diplomat Peter Galbraith, in a blunt assessment.