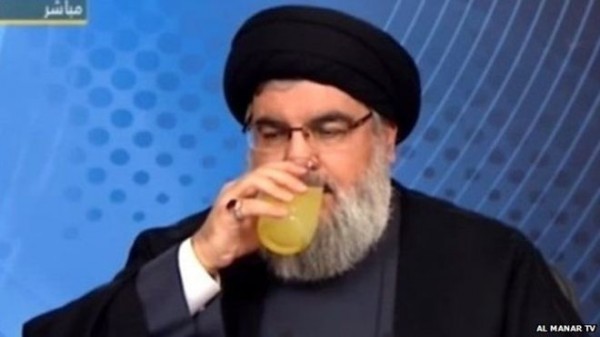 Lemonade may not be the first thing that comes to mind when you think of Lebanese militant group Hezbollah, but its leader swears by it to get him through his notoriously long speeches.

Rumours have been circulating over the health of the group’s secretary-general, Sheikh Hassan Nasrallah, with speculation that the drinks he constantly sips during speeches are actually medicine. But Sheikh Nasrallah recently shrugged this off by insisting there was nothing more than lemonade in his glass. Extolling the soft drink’s benefits, he said it “helped in delivering speeches” and advised all orators to have some handy, the al-Akhbar news website reports.

It didn’t take long for social media users to poke fun at the statement, with some dubbing lemonade “Hezbollah’s official drink”. Many adopted the term Qalamounada, a mash up of the Arabic word for lemonade – lamounada – and the site of a current Hezbollah battle in the Qalamoun mountains of Syria. “I’m inviting you for a Qalamounada,” one Twitter user declared after the speech. On Facebook, one man jokes that lemon prices have risen and supplies are running low since the Hezbollah leader “prescribed” it.

And the impact isn’t just on the internet. Al-Akhbar says cafe owners are offering free lemonade to mark every speech he gives, while another report says shop owners in Hezbollah’s south Beirut stronghold have hung up signs advertising fresh “Nasrallah lemonade”.