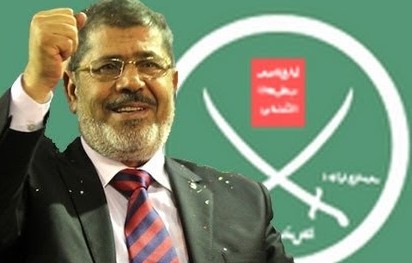 Ousted Egyptian President Mohammed Morsi with banner of the Muslim Brotherhood behind him. The Muslim Brotherhood admitted of making a mistake , apologized to the Egyptian People
Share:
CAIRO — An Egyptian court on Saturday sentenced the country’s first freely elected leader, ousted Islamist President Mohammed Morsi, to death over a mass prison break during the 2011 uprising that eventually brought him to power.

The ruling applies to another 120 people, and is the latest in a series of mass death sentences handed down since the military overthrew Morsi nearly two years ago. The sentence will likely further polarize Egypt, a longtime U.S. ally grappling with an Islamist insurgency that has intensified since Morsi’s overthrow.

In what appears to be the first violent response to the ruling, suspected Islamic militants gunned down three judges and their driver in the northern Sinai Peninsula city of al-Arish, according to security officials, who spoke on condition of anonymity because they were not authorized to speak to the media.

Egypt’s judiciary has come under mounting international criticism since Morsi’s ouster as it has handed down harsh mass sentences to Islamists and jailed secular activists for protesting. At the same time, the courts have acquitted or handed light sentences to top officials who served under President Hosni Mubarak, whose nearly 30-year reign was ended by the 2011 Arab Spring-inspired uprising.

“These sentences are yet another manifestation of the deeply troubling way the Egyptian judiciary has been used as a tool to settle political disagreements,” Emad Shahin, a professor at the American University in Cairo who was sentenced to death in absentia wrote in a Facebook post.

“Due process, regard for evidence, and minimum standards of justice have been tossed aside in favor of draconian injustice,” wrote Shahin, now a visiting professor at the School of Foreign Service at Georgetown University.

As is customary in capital punishment cases, Judge Shaaban el-Shami referred his death sentences on Morsi and the others to the nation’s top Muslim cleric for his non-binding opinion. El-Shami set June 2 for the next hearing, and the sentences can be appealed.

Morsi already is serving a 20-year sentence for his part in the killing in 2012 of protesters outside a Cairo presidential palace.

The military overthrew Morsi in July 2013 following days of mass protests by Egyptians angered by his divisive policies. Egyptian President Abdel-Fattah el-Sissi, who had been appointed military chief by Morsi, led his ouster, and was elected nearly a year ago in a vote boycotted by the Islamist opposition.

Since his ouster, authorities have cracked down on Islamists and pro-democracy activists who were instrumental in the 2011 uprising. Thousands of Morsi supporters have been jailed and hundreds killed in street clashes over the last two years, including at least 600 in one day, when security forces violently dispersed two pro-Morsi sit-ins in August 2013.

After the verdict was read Saturday, a smiling Morsi defiantly waved the four-finger sign associated with the sit-ins.

As the government has cracked down on Islamists and other activists, the courts have been far more lenient to Mubarak-era officials. Mubarak himself was acquitted in November of charges linked to the killing of hundreds of protesters in 2011 and has not spent a single day in prison since his arrest in April 2011.

The 87-year-old Mubarak was sentenced to three years for corruption on May 9 but was later declared a free man since he had already spent three years in detention, mostly at a Nile-side military hospital in a southern Cairo suburb. Prosecutors have appealed his acquittal over the death of protesters, and a high court will decide next month if he should be retried.

Sentenced to death with Morsi on Saturday were 105 defendants, including some 70 Palestinians. The defendants include the Brotherhood’s spiritual leader, Mohammed Badie — who has already been sentenced to death in a separate trial — as well as one of the Arab world’s best known Islamic scholars, the Qatar-based Youssef al-Qaradawi. Most defendants were tried and convicted in absentia, meaning they will receive automatic retrials if they are detained.

Supporters of Morsi and his Muslim Brotherhood, now outlawed and branded a terrorist group, chanted “down, down with military rule” as the judge announced the verdict in a converted lecture hall in the national police academy.

Prosecutors alleged that armed members of the Palestinian Hamas group entered Egypt during the 18-day uprising through illegal tunnels running under the Gaza-Sinai border. Taking advantage of the turmoil, the militants fought their way into several prisons, releasing Morsi, more than 30 other Muslim Brotherhood leaders and some 20,000 inmates, prosecutors say. Several prison guards were killed and parts of the stormed prisons were damaged.

Hezbollah and Hamas operatives who had been convicted and sentenced to jail terms over terror-related charges were also sprung out of jail in 2011.

In Gaza, Hamas spokesman Sami Abu Zuhri said the sentencing to death of the Palestinians was “regrettable” and “shocking,” adding that “some of those convicted were killed before the Egyptian revolution and others are serving prison terms in Israel.” He said nothing about Morsi’s death sentence.

Hamas is the Palestinian chapter of the Muslim Brotherhood and enjoyed close relations with Morsi during his year in office, but has denied taking part in the prison breaks.

Amr Darrag, a Cabinet minister under Morsi and a co-founder of the Brotherhood’s Freedom and Justice Party, also blasted Saturday’s verdicts.

“Today will be remembered as one of the darkest days in Egypt’s history,” he said.

An Islamist opposition alliance led by the Brotherhood meanwhile called on Egyptians to step up the campaign to topple the “gang of treachery and usurpers” in the run-up to July 3, the second anniversary of Morsi’s removal from power.

Amnesty International also denounced the verdicts, saying “the death penalty has become the favorite tool for the Egyptian authorities to purge the political opposition.”

Turkish President Recep Tayyip Erdogan said el-Sissi’s government was returning to the “old Egypt” by rolling back democracy. He also criticized the West, saying it had failed to speak out against such death sentences.

Morsi escaped a death sentence in a separate case before the same judge related to allegations that he, several of his aides and Brotherhood leaders allegedly passed state secrets to foreign groups, including Hamas and Lebanon’s Hezbollah, during his time in office. A total of 16 senior Brotherhood leaders and aides were sentenced to death in that case, including one woman.

A verdict on Morsi’s role will be announced in the June 2 hearing.
Associated Press/ my Way